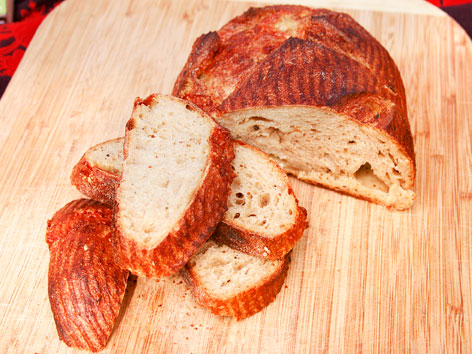 What: Hearty, pliant bread with a moist, stretchy crumb and a shatter-crisp crust: This is the manna of San Francisco. The bread’s distinctive tangy flavor is achieved by “catching” naturally occurring lactobacilli (a type of bacteria) and yeasts that ferment and produce lactic acid—no packaged yeast needed (in fact, this type of bread predates packaged yeasts by millennia). The bacteria, wild yeast, and ensuing lactic acid are cultivated in a simple starter of flour and water that, if regularly “fed” more flour and water and left to grow, results in a bake-ready loaf of sourdough bread. The original starter can be saved for long periods of time—we’re talking a century-plus—and used as a base for new loaves of bread when needed.

So why sourdough in San Francisco? The city’s steadfast association with this bread is twofold. First, the dominant strain of lactobacilli found in sourdough cultures is incredibly prevalent in San Francisco, so much so that it was named Lactobacillus sanfranciscensis. Second, sourdough bread gained a major foothold here during the Gold Rush boom—French immigrants brought wild-yeast bread-baking techniques with them in the 19th century, and miners developed a taste for the intensely sour, seafood-friendly bread. As a result, sourdough bread has been in continuous production here since 1849, the time period to which some of the more established bakeries date their starters. But leave it to San Francisco to combine foodie culture with baking tradition: A new school of sourdough has emerged over the last decade, combining traditional starter techniques with incredible attention to craft and flavor, and even untraditional grains.

Where: When it comes to new-school sourdough, we’re obsessed with Josey Baker Bread. Josey Baker (yes, that’s his real name!) is a passionate, DIY-driven baker who studied bread baking and began selling loaves outside San Francisco markets and restaurants in 2010. His popularity spread so quickly that in 2013 he opened, along with Four Barrel Coffee, The Mill (736 Divisadero St., betw. Grove & Fulton Sts., map), a gorgeous, light-filled space where you can get his bread fresh from the oven, by the loaf and in the form of (sometimes controversial) thick-sliced toast. Baker’s breads come in a variety of flavors and styles, but his sourdough base (which often uses whole-wheat flour) has the fresh, addictively savory tang we love, as well as a beautifully burnished crust. As the name of the bakery suggests, Baker has been working to mill his own flours, too, making his breads San Francisco-produced from start to finish.

Order: Whichever loaf of fresh bread sounds good to you. You might try the “wonder bread” or country bread to start—each is just bread flour, whole-wheat flour, sourdough cultures, and sea salt—and then experiment from there. We recently fell in love with a warm loaf of black-pepper parmesan bread ($6), which has a whole-wheat sourdough base. With pockets of salty parmesan and piquant hints of pepper, this bread is delicious and fresh enough to gobble plain, by the slice—the slightly sticky, pliant interior indicates the high quality of the starter; the crust is firm enough to provide textural contrast without tearing up the roof of your mouth.

Alternatively: In a conversation about lauded San Francisco breads, Tartine Bakery (600 Guerrero St., at 18th St., map) is sure to surface fast. Everything that comes out of this Mission District bakery is incredible, and its sourdough method (literally referred to as the Tartine Method) has become the baseline approach for the vast majority of San Francisco bakers, both professional and recreational (Josey Baker included). Baker Chad Robertson has lately been experimenting with ancient grains; you can find the classic Tartine country loaf and some of his newer creations at sister restaurant Bar Tartine (561 Valencia St., betw. 16th & 17th Sts., map) during the day, Wednesday through Sunday. Acme Bread (multiple locations including 1 Ferry Building, at Embarcadero, map) is another stalwart San Francisco sourdough producer–its baguettes, epi loaves, and boules are delicately subtle, with a light, airy crumb and a gorgeous golden crust. But when it comes to the old guard of San Francisco sourdough, Boudin Bakery (multiple locations including 160 Jefferson St., betw. Mason & Taylor Sts., map) is the one to know. Here the Gold Rush-era starter lives on, and the bread, while lacking the impeccable crust and sticky interior of some other bakeries, is as classic and sour as they come. You can try it in the form of the iconic bread bowl, but we prefer to enjoy our bread separately—paired with a bowl of cioppino for the perfect San Francisco meal.