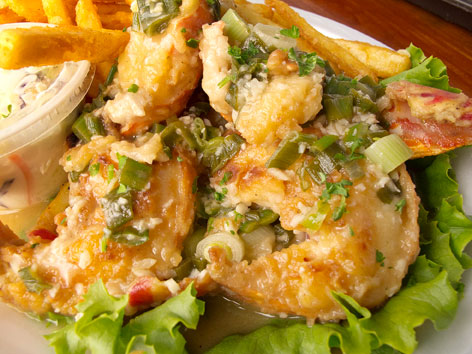 What: What you see called “Florida lobster” is otherwise known as spiny lobster, and is distinguished by the spines on its body, hooked horns over its eyes, prominent antennae, and lack of pinching claws (it has five walking legs). Often compared to a giant crawfish, this lobster is a common catch off the Keys during its August-April season, rightly popular for its sweet white tail meat.

Where: One of our favorite spots in the Keys is Marathon’s Keys Fisheries Market & Marina (3502 Gulf View Ave., map), where an onsite fleet and processing plant, counter service, and waterfront picnic tables translate to (comparatively) low prices for fresh local seafood, including lobster. It’s a simple and delicious formula for great eats right off the Overseas Highway. Bonus: In the parking lot, there’s a cool second-story full-service glass-fronted bar overlooking the water.

Order: Pictured is the delicious sautéed lobster tail ($23.95), cooked to perfection in white wine, butter, shallots, and scallions. There’s no going wrong with that formula! (Also, the fries it comes with are awesome.) Or have your lobster broiled (with key lime butter), served whole and stuffed, in a lobster bisque, in the “famous lobster Reuben,” or fried as tail nuggets. We also suggest the golden crab cake and stone crab claws here—and just about any of the other seafood on offer.