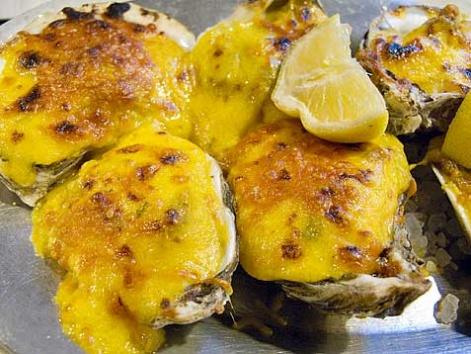 What: For this Creole dish, named for the French governor of Louisiana and founder of New Orleans, oysters on the half shell are coated with a sauce including butter, wine, finely diced shrimp and mushroom, cheddar and Parmesan cheeses, and then broiled and served over rock salt with lemon—all to delicious effect.

Where: No-frills Felix’s Restaurant & Oyster Bar (739 Iberville St., map) in the French Quarter does a great rendition of this dish using only Louisiana oysters. Sit at the bar for a lively atmosphere.

Alternatively: Legend has it that Arnaud’s (813 Bienville St., map) in the French Quarter invented this dish, and it’s still available there—as well as at Antoine’s (713 St. Louis St., map), also in the Quarter. Both places are more formal, however, and you’ll pay a few bucks extra. Uptown, we’ve heard good things about the oysters Bienville at Italian-Creole Pascal’s Manale (1838 Napoleon Ave., map).