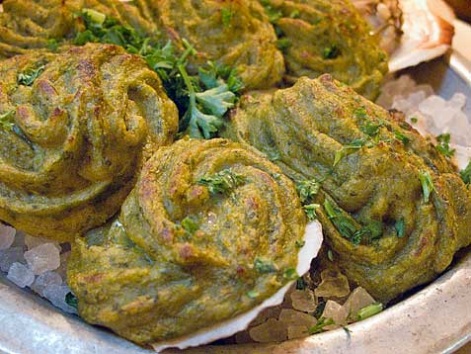 What: Famously named for John D. Rockefeller because of its “richness,” this dish consists of oysters baked with a green vegetable puree. Its backstory is perhaps more interesting than the dish itself: Mr. Antoine Alciatore of Antoine’s Restaurant (see also: eggs Sardou) created oysters Rockefeller in 1889 because, reportedly, he didn’t like waste—so he devised a green sauce using seven vegetables he often saw his staff throwing away. Brennan’s, another historic French Quarter restaurant that’s still chugging away today, allegedly wanted the recipe but couldn’t crack its ingredient code, so its chef started using spinach to make the dish’s sauce, thus inventing the manner in which most Americans know oysters Rockefeller today. But the original original is only at Antoine’s, and the ingredients are still a secret...though our chatty waiter did hint that while no spinach is used, watercress “might” be.

Where: It has to be Antoine’s (713 St. Louis St., map), the grand old dame of a Creole eatery in the French Quarter that claims title to America’s oldest family-run restaurant (it opened in 1840). Its attached Hermes Bar, which opens onto the street next to the restaurant’s main entrance, offers a more casual setting for noshing if you don’t want a full meal.

Order: Oysters Rockefeller (6 for $14.25 in restaurant; $13.75 at Hermes Bar), definitely accompanied by a proper Sazerac. You might also want to try another sinfully rich creation of Antoine’s, oysters Foch (fried cornmeal-crusted oysters on toast spread with pâté de foie gras, served with a dark hollandaise-like sauce).

Alternatively: There’s no alternative to this particular oysters Rockefeller, but if you’re up for an old-school taste test, try ’em at Brennan’s (417 Royal St., map), too. (Note: As of Dec. 2013, Brennan’s was temporarily closed and relocating, but expected to reopen in 2014.) And while there are no historic ties to the dish, if you are eating Uptown, try ’em at Pascal’s Manale (1838 Napoleon Ave., map), too.