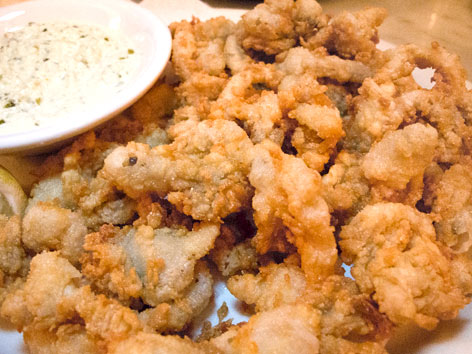 What: Like clam chowder and lobster rolls, fried clams embody the New England coast—its geography, culture, bounty—in all its salty glory. In fact, one North Shore restaurant claims to have invented the battered, deep-fried clam in 1916 (a claim that might not mesh with records that Boston restaurants, including the Parker House, listed “fried clams” on their menu as early as 1865, though it’s possible the bivalves were prepared differently). The best clams around here are Ipswich soft-shell clams (a.k.a. steamers); for this dish, they’re traditionally dipped whole in evaporated milk, dusted with flour, and fried in oil or lard. The name comes from the North Shore town of Ipswich (30 miles north of Boston), parts of which, along with neighboring towns, compose the Great Marsh: 20,000-plus beautiful acres of salt marsh, barrier beach, tidal creek, estuary, and mudflat, the latter of which has long been the preferred habitat of soft-shell clams. Done well, fried Ipswich clams are a crispy, briny delight.

Good to know: The name “Ipswich clam” is often applied to other soft-shell clams from outside the Great Marsh area, especially as the local clam beds can’t always meet the season’s demand. It’s a good idea to ask restaurants about the source of their Ipswich clams—some places actually get soft-shells from Nova Scotia or Maryland and call them “Ipswich.” In Boston, you can be reasonably assured you’ll get a New England-born clam, whether from the Ipswich area, Cape Cod, or Maine.

Also good to know: Menus usually specify “whole-belly clams” or “clam strips,” which are sliced parts of hard-shell clams. If you see “Ipswich clams,” you’ll get the whole clam. That’s what you want: the tender, flavorful belly.

When: Daily, 11:30am till the kitchen closes: 9:30pm on weekdays and around 10:30pm on weekends. (The raw bar generally stays open an hour later than the kitchen.) Expect a wait.

Order: The fried Ipswich clams (market price; $19 during our visit) are wonderful here: delicately fried and just slightly salty, so the clams’ sweet, briny flavor really shines through. They’re served with lemon and an excellent lemony, pickle-y tartar sauce, made in-house. For an ideal Boston meal, follow it up with a hot, buttery lobster roll.

Alternatively: Road trip alert! Ipswich clams only get better the closer you get to Ipswich (duh), so drive 40 minutes north of Boston if you can. You can’t get more locavore than the prized “native” clams at Clam Box of Ipswich (246 High St., map) in Ipswich, a seasonal shack that’s shaped like an open box of clams (open mid-Feb through Dec; skip the “clam plate” unless you want a pile of fries/onion rings too). In nearby Essex, just south of Ipswich and right along the estuaries of the Great Marsh, there’s Woodman’s (121 Main St., map), which claims to have invented the fried clam as we know it today, as well as Essex Seafood (143R Eastern Ave., map), an awesomely no-frills little seafood shack and fish market. Back in Boston, we also liked the fried clams at Island Creek Oyster Bar (500 Commonwealth Ave., map), where they’re “hand dug” from the South Shore; and you might even try the local whole-bellied critters at regional chain Legal Seafoods (multiple locations including 255 State St., map), which seems to know its way around the area’s clams (see also: New England clam chowder).