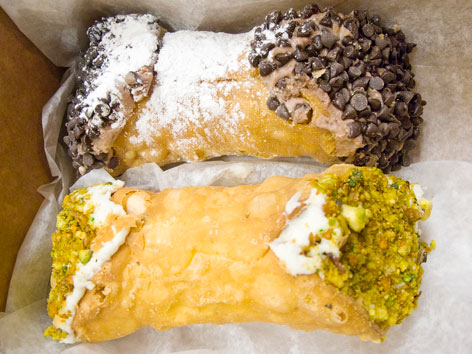 What: Boston’s Little Italy is located in the North End, which is famed for being the city’s oldest neighborhood (continuously inhabited since the 1630s)—though the Irish, Portuguese, and Jewish lived there before the Italians moved in, around the early 20th century. Today the area is home to narrow, winding streets; historic buildings along the Freedom Trail (such as the Paul Revere House); a large number of Italian restaurants and pizzerias; and the most wildly popular—and disputed—Italian pastries in New England.

Which pastries specifically? Mostly it’s cannoli, Sicilian pastries in which tubes of fried pastry dough are filled with a sweet mixture of ricotta cheese, cream, and other flavorings. The other popular sweet here is the lobstertail, the local name for aragostine: Similar to the clam-shaped sfogliatelle, it’s a massive, layered pastry in a vaguely lobstery shape stuffed with a mix of custard, ricotta and whipped cream.

Where: You should know that there are two main decades-old players in the Beantown cannoli war: Mike’s Pastry (300 Hanover St., map) and Modern Pastry (257 Hanover St., map). We tried both and opted to feature Mike’s cannoli here, even despite the place’s madhouse, tourist-swamped nature. Why? Mike’s are bold and brash Boston-style cannoli at their finest.

Order: Mike’s offers a ridiculous variety of cannoli (not to mention other sweets), from the classic ricotta cheese-filled to the chocolate-dipped, espresso-cream-filled, and hazelnut-crusted. Start with the basics before you get too crazy. We chose the ricotta pistachio—ricotta cheese filling, with the ends dipped in crushed pistachio—and the chocolate ricotta with chocolate chips, which came dusted with powdered sugar ($3.50 each). First thing to know: The cannoli at Mike’s are on steroids. You can’t tell from the photo alone, but they’re giant and filled to the brim (definitely more Boston than Sicily). Second thing: They’re highly addictive. Sure, they are wonderfully creamy and gently sweet inside, but it’s the handmade shell that keeps you coming back for more. Unexpectedly light and crisp, fresh and flaky, it manages to balance the rich filling and overall heft of the thing.

Alternatively: To be fair, we really liked Modern’s cannoli as well: They’re smaller, denser, and more traditional, with the bonus of being filled to order. And there’s much less pandemonium in there at night. In fact, given Mike’s and Modern’s locations, there’s no reason—save, well, a diet—why a visitor to Boston shouldn’t try both. Just to confuse things, we’ll give you one more good one in the neighborhood: Maria’s Pastry Shop (46 Cross St., map).