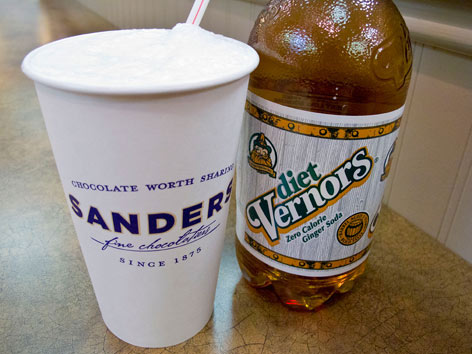 What: These popular soda-fountain drinks have nothing to do with Boston, but everything to do with Detroit: Vernors ginger soda, said to be America’s oldest surviving soft drink, was born in 1866 in a downtown Detroit pharmacy, where James Vernor accidentally (according to legend) developed the barrel-aged syrup for the soda upon returning from the Civil War. Now widely distributed, Vernors is part of the Texas-based Dr Pepper-Snapple Group, Inc., but Detroiters still call it their own, and the golden ginger soda—which has more zip, carbonation, and sweetness than the dry ginger ales most of us are accustomed to—still provides the base for these two beloved kid-friendly beverages. Both combine Vernors ginger soda with vanilla ice cream; the Boston cooler blends the two together, so it’s more of a shake.

Where: Our Boston cooler—which goes by the name Detroit cooler in this shop—is from the Livonia-area Sanders (734-591-2147; multiple locations including 37702 W. Six Mile Rd., map), located inside the food court of the Laurel Park Place shopping mall. All Sanders parlors serve both the coolers and Vernors floats. (Despite the photo, neither is made with Diet Vernors; this branch carried only the diet version in bottles, which we used for photographic purposes.)

Order: Of the Vernors float and cooler ($4.95/$5.95 for small/large), we preferred the latter, because we love sweet, smooth, creamy milkshakes (who doesn’t?). The float has its merits, of course—you can better taste the separate components, for one—but the blended cooler proved quickly and addictively delicious. If you can handle more sugar, try Sanders’ hot fudge cream puff, too.