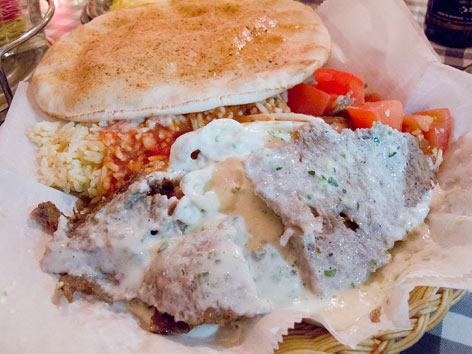 What: You’ve probably heard of Detroit’s Greektown: Just northeast of downtown, it’s the tiny, brightly lit dining and entertainment district dominated by a casino and lots of Greek restaurants. It was settled first by Germans in the 1830s, and then by Greeks around the turn of the 20th century. Though the Greeks moved to more residential neighborhoods shortly thereafter, the Greek businesses remained, many of them housed in Victorian-era buildings. Over the decades, the area has shrunk dramatically, so to prevent Greektown from becoming another downtown parking lot, it was listed on the National Register of Historic Places in 1982. (Although sadly, a few popular Greek restaurants have closed in recent years.)

Where: We chose the no-frills, 40-year-old Golden Fleece (525 Monroe St., map), because we were after cheap, good, and filling Greek food—note that there are plenty of more upscale options too—and especially an excellent gyro. Golden Fleece is celebrated for its gyros, which use real lamb meat carved off a visible spit, as opposed to the more processed, pre-sliced, reheated blend of meats used by some other restaurants.

Order: Have the gyro platter ($10.55), a very generous portion of tasty sliced lamb splashed with tzatziki, topped with raw onion, and served with toasted pita, chopped tomato, and rice, which has a tomato-y sauce on top (fries are also available). There’s a good vinegary hot sauce on the table. We also tried the “saganaki OPA,” kasseri cheese doused with vodka and lit tableside, served with nice, soft white bread—the cheese itself was good when eaten immediately, but don’t let that baby get cold—and a small Greek salad. Shish kebabs are rumored to be great here, and we’ve heard good things about the octopus salad. It’s definitely food to be paired with a cold local beer…like perhaps a Badass American Lager, from son of Detroit Kid Rock—not the greatest beer there is, but light and refreshing nonetheless.

Alternatively: For Greek food that’s more upscale (and expensive) than gyros, Pegasus Taverna (558 Monroe St., map) is a favorite among tourists and locals alike, with a lengthy menu, fun atmosphere, and particularly good lamb dishes (and even the brandy-doused saganaki is more refined). Follow up your Greektown meal with a coffee or honeyed sweet at Astoria Pastry Shop (541 Monroe St., map), where baklava and kourabiethes (butter-almond cookies) are among the Euro pastries on offer. And if you’re outside of Greektown when the craving hits, remember you can always find a quick Greek snack—gyros, Greek salad, spinach pie—at any decent Coney restaurant, like Kerby’s Koney Island (multiple locations including 16531 Ford Rd., Dearborn, map).