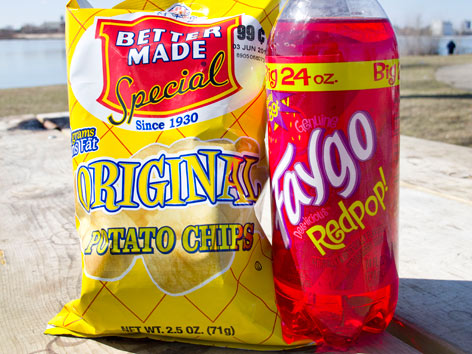 What: Detroit has a few beloved homegrown snacks that you’ll find in any grocery store (or gas station, for that matter). Junk food, really, but when the craving strikes, why not support local businesses? On the soda front, there’s Faygo, headquartered in Detroit since 1907, when it was founded by Russian-immigrant bakers who created soft drinks based upon cake-frosting recipes; there’s also Vernors ginger soda, of course, founded by a Detroit pharmacist in 1866, though unfortunately, as part of the Texas-based Dr Pepper-Snapple Group, Inc., it’s no longer made in town (see also: Boston cooler, Vernors float). On the snack front, look no further than Better Made potato chips, a Detroit institution since 1930 that shies from trans fats and is surprisingly locavore: For up to 10 months of the year, the company uses Michigan potatoes to make its chips, kindly explaining on the packaging that “nature won’t allow us to use them all year long” (the rest of the year, potatoes are sourced from Florida, North Carolina, Indiana, and Missouri). This is junk food we can stand behind.

Where: Any corner grocery or gas station. We picked up our goodies from a Marathon gas station on East Jefferson Ave, map.

Order: Of Faygo’s 50-plus flavors, locals agree the most iconic are the vaguely strawberry-flavored Redpop—strawberry was one of the brand’s original three flavors, after all—or Rock & Rye, a sweet cream cola that dates to the 1920s (alas, there is no rye whiskey in it). We tried Redpop ($0.99) and have to conclude it’s an acquired nostalgic taste. (It was pretty cough-syrupy to us. Sorry, Detroiters.) Next time we’ll seek out one of the retro glass bottles, which substitute cane sugar for high-fructose corn syrup. As for Better Made chips ($0.99), you can’t go wrong with the regular variety: It’s a classic, basic chip, very thin and just crisp enough. We also liked the spicy Red Hot BBQ flavor, and wouldn’t hesitate to grab Salt & Vinegar next time. [Of course, Faygo and Better Made prices may vary depending on where you buy them.]