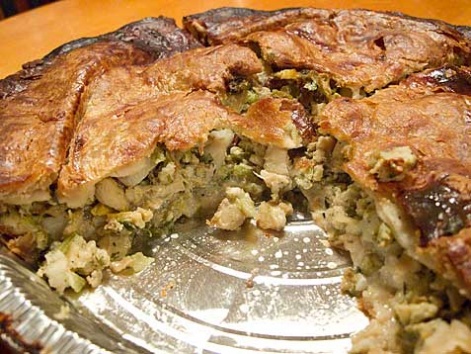 What: Traditional to the East End of Long Island, where it’s long been known as Bonac clam pie (named for the working-class Bonac people, descended from the first English settlers of the area, who live in and around East Hampton, NY), the humble clam pie is generally made of chopped or ground clams, onions, potatoes, spices, and cream or milk—kind of like clam chowder in a pie crust. According to Edible East End, the dish likely has origins as a dish of frugality—a simple, filling way of using up all those easy-to-harvest local clams, and feeding the family for a day or two. Though clam pie is hard to come by outside the home today, it’s worth seeking out for the taste it provides of a fading culture often overshadowed by the area’s glitz.

Where: Fifteen minutes west of Montauk in Amagansett, the folks at Stuart’s Seafood Market (41 Oak Lane), a small shop just off the main drag, still make their clam pies by hand, in-house, with local clams.

Order: A clam pie ($20 for large/9-inch), filled with chopped clams, potatoes, celery, onion, cream, parsley, and spices. We bought ours frozen here, so just had to bake it for about 30 minutes (and you definitely want it well-heated—this does not work lukewarm). The pie tastes heartily of the sea, and though ours was a bit dry—we’d hoped for creamier insides—the flavor was unmistakably chowder-like. We’ve heard the lobster pies are also good at Stuart’s.

Good to know: You can have Stuart’s clam pies, among other things, mail-ordered if you just can’t wait till your next East End visit.

Alternatively: Stuart’s is the closest—and only—place we found selling clam pies near Montauk. We imagine you’d be able to track one down further west in East Hampton as well.