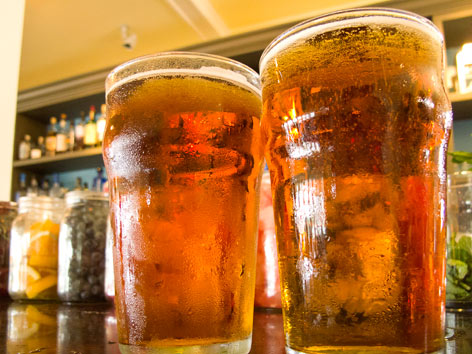 What: Long Island—Suffolk County in particular—is home to a few excellent craft breweries. Southampton Publick House is the closest to Montauk, followed by the tiny Greenport Harbor Brewing Co. up on the North Fork, the more ubiquitous Blue Point Brewing Co. in Patchogue, about 65 miles west of Montauk, and the newer Long Ireland Beer Company, based in Port Jefferson Station. Then there’s Bay Shore’s Great South Bay Brewery, named for the saltwater lagoon between Long Island’s south shore and Fire Island, the teeny-tiny Blind Bat Brewery, with a small distribution out of Centerport (the brewmaster, interestingly, is near-sighted and colorblind); and the new Spider Bite Brewery from Holbrook, which is ramping up its Long Island and NYC distribution. As the name suggests, Fire Island Beer likewise has a Long Island connection—its creators spent summers on the car-free island-off-the-island, and do their recipe pilot batches there—though all production brewing happens in Saratoga Springs, NY. None of these beers are actually brewed in Montauk, but they’re pretty close!

Where: If you’re not planning on hopping in your car to visit any or all of these breweries (and we can’t really recommend you do that in the height of summer traffic), swing by the terrific South Edison (17 S. Edison St.) in town, where the locavore-centric menu extends to the beer taps.

Order: During our last visit, the bar had brews from Blue Point (its delicious Toasted Lager is pictured), Great South Bay, and Greenport on tap (as well as Westchester’s Captain Lawrence and a bunch of solid Sixpoints, from Brooklyn). Pints range $6-$7; pitchers, served in growler bottles, are $22-$26. You can also buy your growler to go for an extra fee.

Alternatively: It’s relatively easy to find Southampton and Blue Point beers, especially the latter’s Toasted Lager and refreshing Summer Ale, in Montauk, but for some of the others, try the Old Harbor House (240 Fort Pond Rd., map)—conveniently located across the street from the train station—or any other good locavore restaurant, like Fishbar on the Lake (467 East Lake Dr., map). For local sixers, try Gaviola’s Montauk Market (631-668-1031; Wells Ave. and West Lake Dr., map) opposite Montauk Harbor—a good pit stop before your next fishing excursion.