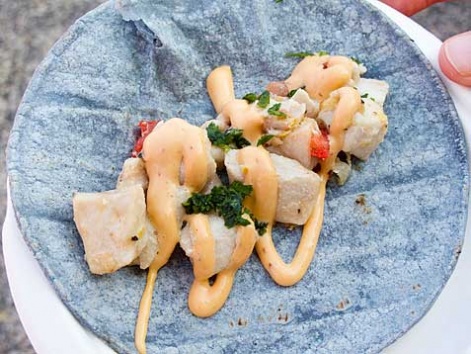 What: The local catch gets the Baja treatment in several spots around town, adding some ethnic variety to the usual “fried or broiled?”conundrum (see also: local fish, Chinese style).

Where: Hit up the mobile Montaco truck (check Twitter for location, though it often spends days at the westerly entrance to Ditch Plains beach) for a quick-and-gourmet local fish taco to go. It joins a delicious shrimp taco, organic meat tacos, veggie tacos, quesadillas, and salads on the menu.

Order: A fish taco ($5)—lightly fried striped bass is what’s pictured, though we’ve seen mahi-mahi on offer as well—which is served on a pretty blue-corn tortilla with tomato, cilantro, and chipotle mayo (the meat/veggie tacos use white-corn tortillas). While it tastes great, we lament the small size of this taco in relation to its price tag, but it seems to be the norm around here.