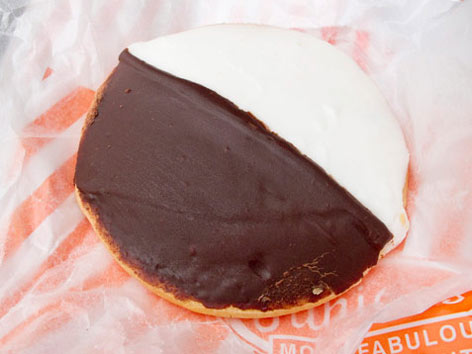 What: Long associated with New York bakeries and delis—and made famous by the Seinfeld episode in which Jerry “looks to the cookie” as a metaphor for harmony among races (before he pukes it up, anyway)—the classic black-and-white shortbread cookie tastes almost like a cake, soft and supple and spread with half vanilla fondant icing and half chocolate. Within New York state there are different varieties of this cookie—for example, the “half-moons” of central New York, reportedly born in Utica, are smaller in size and usually spread with buttercream frosting, not icing—but we’re talking about the ubiquitous city treat here.

Where: We didn’t think we even liked the black-and-white—granted, there are a lot of truly bad, cardboardy, plastic-wrapped ones out there—until we had the cookie at Junior’s (multiple locations including the original: 386 Flatbush Ave. Ext., map) in downtown Brooklyn. Now, everyone and their mother likes to moan about how the food’s gone terribly downhill there, but we think if you stick to cheesecake and black-and-whites, you’ll be just fine.

Order: A black-and-white cookie ($2.95). Its soft, yellow, cakey insides taste subtly of lemon and vanilla, and swell slightly in the center so that it’s nearly an inch thick in the middle; the icing is sweet and soft—and you can actually taste the vanilla versus the chocolate (as Jerry advised, the best bites are indeed those that include a little bit of both). You should probably try the famous cheesecake here, too.

Alternatively: On Manhattan’s Upper East Side, William Greenberg Desserts (1100 Madison Ave. betw. 82nd-83rd Sts., map) has excellent, if pricey, black-and-white cookies ($1.50 for small, $3.50 for the usual large size); it’s a great place to buy boxes of them to bring home. On the Upper West Side, historic appetizing shop Barney Greengrass (541 Amsterdam Ave. at 86th St., map) may be best known for its sturgeon, but we've heard great things about its B&W cookies, too. In Brooklyn, a good spot is the old-school Leske’s Bakery (7612 5th Ave. nr. 76th St., map) in Bay Ridge, which more recently opened a second branch in South Park Slope.