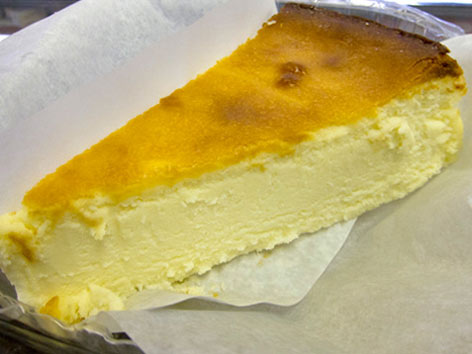 What: A slice of cheesecake is the quintessential end to a meal in New York. But not just any old cheesecake: New York-style means it’s made with cream cheese—plus a few other important ingredients, of course (eggs, sugar, heavy cream, etc.)—which gives it its decadent, creamy texture and taste. While cheesecake itself was likely born with the ancient Greeks and/or Romans (the Italian version is traditionally made with coarser, lighter ricotta cheese), the origins of New York-style cheesecake aren’t clear. One alleged inventor (or popularizer, at least) is midtown NYC’s (now defunct) Turf Restaurant, whose owner attributed the recipe to his family circa 1929. Don’t be fooled by its unadulterated simplicity: This is not a dessert for the weak-hearted.

Where: We like the super smooth and creamy cheesecake at D’Aiuto Baby Watson Cheesecake (212-564-7136; 405 Eighth Ave. betw. 30th & 31st Sts., map). It’s on the dense end of the cheesecake spectrum—as it should be in New York, we think—and is a crustless cake, so nothing interferes with that rich, not-too-sweet flavor and luscious, silky innards.

NOTE: At last update, in summer 2014, D’Aiuto had closed for good (word is a hotel is moving in). For now, you can find the bakery's products, including cheesecake slices and the crustless “Baby Watson” cheesecake rounds, at Jessie's Deli, a few doors down. Beyond that, they are sold at the bakery's other location in Bensonhurst, Brooklyn: Mona Lisa Bakery & Cafe (1476 86th St., map). Please see our alternatives for more cheesecake ideas.

Order: A slice of plain cheesecake ($3.25). Repeat as necessary.

Alternatively: Every New Yorker will tell you something different, as plenty of good traditional cheesecake can be found in this town. In the East Village, there’s the historic Veniero’s Pastry (342 E. 11th St. betw. First & Second Aves., map), where the creamy New York cheesecake is sold as various rounds (from $4.25, for mini); while there, try a slice of the delicious Italian ricotta cheesecake too, a lighter style that we sometimes prefer. Junior’s (multiple locations including the original, 386 Flatbush Ave. Ext., Brooklyn, map) is the most famous, as its $6.25-a-slice price reflects; it’s also the densest, richest, creamiest cake around, with a lemony sponge-cake crust. Also sweet-n-creamy is the namesake from S&S Cheesecake (222 W. 238th St. nr. Broadway, map) in the Bronx (from $14 for a 7-incher), while Eileen’s Special Cheesecake (17 Cleveland Pl. nr. Kenmare St., map) in SoHo gets props for its lighter, more delicate specimen (from $3.50, for mini).