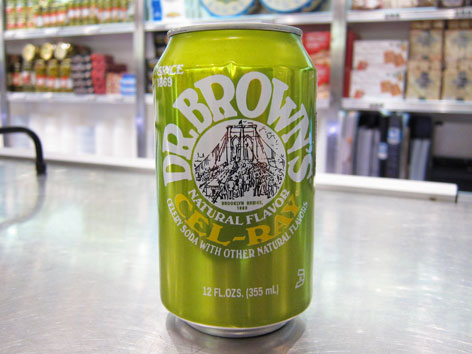 What: This kosher soft drink from a bygone era was originally referred to as Dr. Brown’s Celery Tonic and marketed as a therapeutic to calm the nerves. (Alas, the FDA ultimately wouldn’t allow the use of “tonic.”) Debuting in 1869, it was sold door-to-door on the Lower East Side of Manhattan and in Williamsburg, Brooklyn, developing a large Jewish following that continues today. Don’t be dissuaded by the “celery” bit: The sweet, but not cloyingly so, soda tastes a little like a peppery ginger ale with crisp nodes of celery seed and other natural flavors. It pairs exceedingly well with fatty pastrami and corned beef sandwiches and remains the staple beverage to drink with any Jewish deli fare.

As for Dr. Brown? He’s kind of a legend—literally—who may or may not have been real. Details about the man behind the brand (which is now owned by the Honickman Beverage Group) are murky at best, but he’s said to have lived in either Williamsburg or the Lower East Side. Convenient, eh?

Where: Find Cel-Ray, sold by the can or longneck glass, in any delicatessen in New York City worth its matzoh ball soup, like the one pictured, iconic appetizing specialist Russ & Daughters (179 E. Houston St. betw Allen & Orchard Sts., map). As of summer 2020, the deli offers walk-in takeout, pickup orders (call ahead 24 hours in advance), and delivery.

When: Russ & Daughters is open daily, 9am-4pm. But the real answer here is: All day every day. Cel-Ray has the unique ability to be enjoyed during breakfast, lunch, or dinner, and by dinner we do mean cocktails (this drink is known as “Jewish Champagne,” after all, and works well as a mixer; see “Alternatively” below).

Order: For a true New York City experience, pair a Cel-Ray with an everything bagel with lox—the sweet effervescence compliments the smoky tones of the fatty salmon while the sugar substitutes for caffeine in a short-lived pick-me-up.

Alternatively: Stay on Houston Street and pair with a mile-high pastrami on rye from Katz’s Delicatessen (205 E. Houston St. at Ludlow St., map), currently open for takeout, delivery, and outdoor dining (for the first time in its 132-year-old history!), or look for it at any Jewish deli you come across. While largely concentrated in Brooklyn and Manhattan, Cel-Ray can be found in select delis and grocery stores (like Publix) throughout Jewish enclaves in the U.S. Northeast and South Florida.

Quarantined? Stay home and order the artisanal cocktail book Shake: A New Perspective on Cocktails, by Eric Prum and Josh Williams, and test your drink-making skills. The Cel-Ray Spring Tonic is perfectly refreshing. Or be daring and substitute Cel-Ray for soda water in any gin-based drink and enjoy the peppery, sweet taste enhancement.