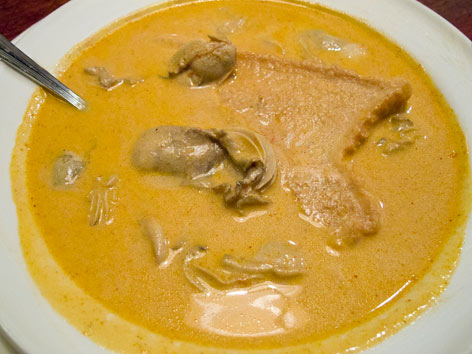 What: Don’t be fooled by the archaic nomenclature: There’s nothing “pan roast” about this century-old New York dish. It’s actually more a delectably rich soup, in which plump oysters and a soaked slice of toast float in a simple concoction of butter, cream, Worcestershire sauce, paprika, celery salt, and tomato-chile sauce. Tucking into a hot bowl of this velvety richness calls to mind a simpler time in Manhattan, when indigenous oysters were still plentiful and “uni” wasn’t yet a part of our collective seafood vocabulary. Today the dish can be experienced at just one particularly famous location.

Where: This dish has been served at Grand Central Terminal’s venerable Oyster Bar & Restaurant (two locations including the original, 89 E. 42nd St. nr. Park Ave., map) since 1913, when the landmark building opened. (In 1999, this spot won the James Beard America’s Classics award, which honors beloved locally-owned establishments serving quality food.) History aside, even the physical making of this dish is entwined with the building, as it harnesses the steam power that emanates from the station’s bowels: As our unionized waiter explained, the cooks use original steam-jacket kettles to heat the ingredients, which ensures that the temperature never rises above 250 degrees and the cream never curdles. If you sit at the main oyster bar, you can watch both the shuckers in action and the pan roasts being prepared.

Good to know: New York City was once the oyster capital of the world, with six-cent “all you can eat” oyster bars lining Canal Street and oyster carts, rather than hot dog stands, crowding the sidewalks. In 1880, the city’s oyster beds produced 700 million oysters a year. With industrialization, however, came pollution, and oystering was officially banned here in 1916, when bivalves were thought to be tied to typhoid fever. Though the Oyster Bar opened three years prior, it never sold New York City oysters.

Order: The oyster pan roast ($11.95), which comes with eight Blue Point (Long Island) oysters, a triangle of toast, and a whole lotta soup. (Note that the “oyster stew,” 50 cents cheaper, is nearly the same thing as the pan roast minus the slight spice from the chile sauce.) But start off with a dozen oysters from the raw bar; there’s always a large selection available from both coasts, including some from Long Island and Connecticut—which is as locavore as New York can get these days when it comes to oysters.

Alternatively: There’s not really an alternative to the quintessential oyster pan roast experience—you kind of need to be here in this old, sprawling, cafeteria-like space, underground beneath the illuminated tile arches. Let us know in the comments if you find another one!