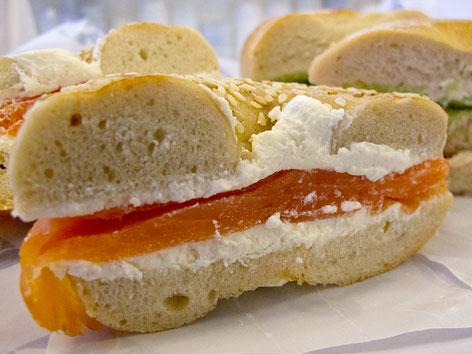 What: With a huge debt to Europe, where fish has long been smoked as a method of preservation, New York City is celebrated for its smoked fish, from salmon to whitefish to sable (black cod). Once again, we have immigrants to thank: Since the arrival of more than a million Eastern European Jews in New York between 1880 and 1920, smoked fish has been the domain of the so-called “appetizing” shops, or stores that essentially sell cold appetizers (“appetizings”), known in Yiddish as the forshpayz, which has been simplified over the years to be thought of as “foods eaten with bagels.” (This is not to be confused with delis, which specialize in meats; one reason for the separation was the kosher dietary law dictating that meat and dairy products not be sold or eaten together—fish and dairy, however, were allowed at the same counter.) Nowadays the appetizing stores are few and far between, but the smoked fish tradition lives on, and thank heavens: Trust us when we say it’s worth getting off your tuches and schlepping from anywhere to nosh on some thinly sliced, delicately smoked salmon and rich whitefish salad. The thought alone makes us verklempt!

A note about semantics: Are we talking about lox when we say smoked salmon? Technically, no. True lox is salmon belly that’s cured in a salt brine; it isn’t smoked at all. It’s very salty in taste, so it tends to be eaten mostly by people who grew up eating it, making it far less common than smoked salmon at your average bagel shop. However, over time the term “lox” has become so often used for smoked salmon that it’s generally acceptable to use the words interchangeably, unless you’re in the presence of a nitpicker—in which case, you’ve been warned.

Where: The Lower East Side is the spiritual home of appetizing shops, and you can still get some killer smoked fish (and true lox) at Russ & Daughters (179 E. Houston St. betw Allen & Orchard Sts., map), a true appetizing specialist just down the block from pastrami king Katz’s (see also: pastrami sandwich). It started a hundred years ago with a man named Joel Russ and a pushcart. Today you’ll recognize it from the glass cases full of fish and the crowds of both locals and tourists.

Good to know: After a century of having to take their smoked fish to go (there’s no seating at the original branch), New Yorkers were thrilled when, in May 2014, Russ & Daughters Cafe (127 Orchard St., map) opened two blocks away, with a full menu and soda fountain/cocktail bar.

Order: It’s a tough call, because you’ll want to try a lot (and tastes are given, fortunately). Most New York-traditional of the smoked salmons is the Gaspe Nova, a silky and mild Atlantic variety, though we loved the richer, smokier Scottish salmon. (Also worth a try at this counter: the pastrami salmon, smoked and then cured with spices from Katz’s.) Most of the salmon here is brined and then cold-smoked, a traditional process in which, according to the shop’s website, the fish is infused with a blend of wood essences in an oven where temperatures are kept below 83°F. If you want to taste authentic lox, the same stuff Mr. Russ sold a century ago, try the super salty “belly lox,” which is not smoked at all.

Besides the smoked salmon, which we enjoyed in the typical presentation pictured—piled onto a small locally baked bagel with plain, thick cream cheese ($11.25)—we highly recommend the whitefish and baked salmon salad here (it is R&D’s tradition to add some baked salmon to regular whitefish salad). It’s rich, smoky, and totally addictive, especially in the Super Heebster sandwich ($10.95; pictured in background), which combines this salad with horseradish dill cream cheese and wasabi-infused flying-fish roe. Don’t ask, just eat: It’s wonderful.

Alternatively: Of course nowadays you can get lox at nearly any bagel shop in the city. But that doesn’t mean you always should, especially when a historic haunt is never too far away. On the Upper West Side, the fish counter at Zabar’s (2245 Broadway at 80th St., map) is legendary, fitting for a place that started in 1934 as an “appetizing” counter in a market. A variety of high-quality smoked salmon, belly lox, whitefish, herring—it’s got it all. Just a few blocks from there is Barney Greengrass (541 Amsterdam Ave. at 86th St., map), another New York classic (and so-called Sturgeon King). Originally opening in Harlem in 1908, the restaurant—you can sit and eat here, at Formica tables—and appetizing store has long specialized in smoked fish; among the many recommended dishes are scrambled eggs with sturgeon and onion, pastrami salmon (or just pastrami!) with eggs, and of course bagels, cream cheese, and smoked salmon. Down in Murray Hill, there’s 1960s relic Sarge’s Delicatessen (548 Third Ave. betw 36th & 37th Sts., map; temporarily closed due to fire damage), with a large menu that hits all the right notes (we hear the smoked sable on a bagel is delicious). Finally, in Carroll Gardens, there’s a new-school shop called Shelsky’s (251 Smith St., map) that just opened in 2011 but is decidedly throwback in its offerings, bringing the smoked fish appetizing tradition back to Brooklyn, where it once thrived.

Good to know: If you’re looking to score a deal on a lot of smoked fish, you can go right to the source, on Fridays anyway. Wholesaler smokehouse Acme (30 Gem St., Greenpoint, map), responsible for smoking much of the city’s fish, sells its product directly to the public from its Brooklyn digs every Friday between 8am-1pm.