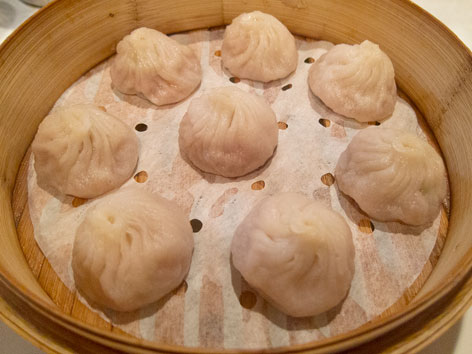 Soup dumplings are what New Yorkers call xiao long bao, those steamed, soupy, traditionally pork-filled buns from Shanghai, China, with the telltale pinch (and, it’s said, 18 folds) at their crowns. The “soup” comes from pork aspic, which is placed inside along with some pork (and/or crab, another popular filling) and becomes nice and liquidy when heated.

Steamed and served in small bamboo baskets, soup dumplings are popular in New York City’s myriad Chinatown Shanghainese restaurants. Of all the Chinese dishes in all the Chinese restaurants of New York’s three biggest Chinatown hubs—in lower Manhattan, the oldest one (dating roughly to the mid-19th century), Flushing (Queens), and Sunset Park (Brooklyn)—this is the most New York of them all.

Like pizza and bagels before them, soup dumplings are a beloved topic for debate: who makes the best, who’s gone downhill, and so on. This is no trivial discussion—average soup dumplings are just OK, while the great ones, with just the right ratio of thin-skinned dough to hot, savory, mouth-filling broth, are downright transcendent.

Good to know: Robert Zimmerman famously drew a cartoon on the subject, but it is worth noting the proper way to eat these things. Using the provided tongs or your chopsticks, first transfer the dumpling to your spoon. Then gently nibble a hole in the skin, through which the broth can safely trickle out—if you go too big, it’ll flood out and burn your mouth. (Worse, you could lose some of the soup.) Slurp some broth out, add a little black vinegar or chili sauce if you wish, then go in for a bite—or take the whole thing if it’s small.  An alternative to nibbling is to use your chopstick to poke a little hole in the dumpling.

Where: We’re not here to say where the BEST soup dumplings definititely are, but we have eaten our fair share of these over the past two decades. In truth our most favorite spot for them closed years ago—but lately, in Manhattan, we like the soup dumplings at 456 Shanghai Cuisine (212-964-0003; 69 Mott St., betw. Canal & Bayard Sts., map), the 2011-opened descendent of an earlier 456 restaurant in Manhattan’s Chinatown. (The New York Times has given a nod to these dumplings as well, if you care about that sort of thing.)

Order: The “steamed pork buns (soup dumplings)” ($5.95 for eight pork; $7.75 for pork/crab combo), and good luck having just one steamed basket's worth. They’re small here, but the upside of that is, after the ever-important introductory nibble, you can pop the whole thing into your mouth for instant gratification! The dumplings are just thin-skinned enough to complement their silky, juicy, porky innards—not too chewy and doughy; not too thin to make the basket-to-spoon transfer a risky mess. They’re just right.

Alternatively: Right down the street, we also really like the soup dumplings like Shanghai Asian Manor (21 Mott St., at Mosco St., map)—see pic here—while Supreme, formerly Shanghai Café (100 Mott St., betw. Canal & Hester Sts., map), has earned top marks (for Manhattan’s Chinatown) among the Serious Eats crew and others. Elsewhere in Manhattan, there are great soup dumplings to be found in the East Village at The Bao (212-388-9238; 13 St. Mark's Place, betw. 2nd & 3rd Aves., map); get the pork ones, and save room for the chocolate dessert variety.

In Flushing, Queens, we love Nan Xiang Xiao Long Bao (39-16 Prince St., map), as well as the pork-and-crab specimens at Kung Fu Xiao Long Bao (59-16 Main St., map), the original outpost of the EV's The Bao. Also unmissable are the xiao long bao at Diverse Dim Sum, inside New York Food Court, No. 12, 133-35 Roosevelt Ave., map). Finally, you can’t talk soup dumplings without mentioning Joe’s Shanghai (46 Bowery, map), the restaurant responsible for making New Yorkers crazy for the things beginning in the mid-1990s. If you don’t like the idea of competing for space with a mob of tourists, though, you might consider trying Joe’s Queens branch (136-21 37th Ave., Flushing, map).