<< back to foods in Asheville 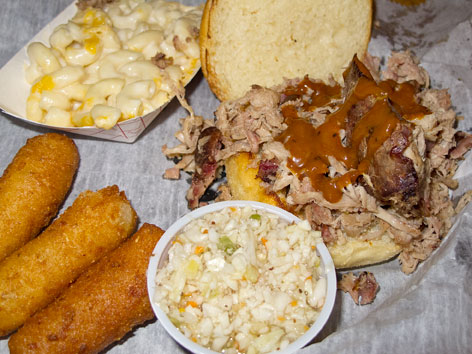 What: To be sure, Asheville isn’t Lexington, the center of BBQ in western North Carolina—in fact, Asheville lies in the mountains west of the Piedmont Plateau, the region in the central part of the state that claims this distinct style of BBQ as its own. But you can still find good BBQ in Ashveville, which in this area means chopped pork shoulder slow-cooked over hardwood or hardwood coals, served with a thin tomato-based sauce and red vinegary coleslaw (there’s usually ketchup in both the sauce and the slaw).

(This differs from eastern-style North Carolina BBQ, which uses the whole hog and doesn’t touch anything red, just vinegar and pepper. Staunch eastern advocates think the west’s use of ketchup is nothing short of an abomination.)

A little history about North Carolina BBQ: Pigs have long been raised in NC, ever since the Spanish introduced them to the area in the 16th century; they were generally smoked over an open fire and seasoned simply with ingredients including salt, black pepper, red pepper flakes, and vinegar. The WNC distinctions are said to have developed in 1920s Lexington, where German-descended vendors sold BBQ out of tents and bottled ketchup was widely consumed. There, the cheapest parts of the pig—like dark-meat shoulder—were the most popular, and the sauce sweeter, with added ketchup and sugar.

Where: Our chopped pork is from Luella’s BBQ (two locations including 501 Merrimon Ave., map), a family-friendly locavore-centric spot that doesn’t tout itself as WNC BBQ—in fact, it offers an eastern-style variation too—but its smoked pork and signature secret sauces deliver. Plus it has great sides and local beers.

Order: The chopped pork BBQ (sandwich, $8.25; platter, $11.95), which comes with a spicy, vinegary slaw of cabbage, carrot, and mustard seeds (note: this is not the red BBQ slaw typical of Lexington-style). Roughly chopped, the tender, moist meat is already lightly basted in a vinegary sauce. Ask for the signature Sweet Pisgah sauce, which is tangy and ketchup-based (the vinegar-based Scooter’s sauce is more eastern style, and there’s a few other options, too). Your order includes some typical Carolina sides: crunchy oblong hush puppies (fried cornmeal fritters) and a choice of others, including the mac-and-cheese pictured).

We also opted for some hearty Brunswick stew, a traditional Southern accompaniment of chopped meat (pork and chicken here), corn, lima beans, and potato, with a tomato base. And some deviled eggs, just because. Pair it all with Cheerwine, a North Carolina cherry-flavored soft drink, or a craft beer from local breweries like Highland or French Broad.

Alternatively: The popular lunch-only 12 Bones Smokehouse (open weekdays only; 5 Riverside Dr., map), in the River Arts District, seems a bit less Carolina in spirit and is more popular for its ribs, but it does have pulled pork and a WNC-style red sauce, plus tons of local brews on tap. In nearby Swannanoa Okie Dokies Smokehouse (2375 US Hwy 70, Swannanoa, map) is one of the few places around here that offers Lexington-style red slaw in addition to “white,” alongside its pulled pork and requisite sides (also: fried pickles!).