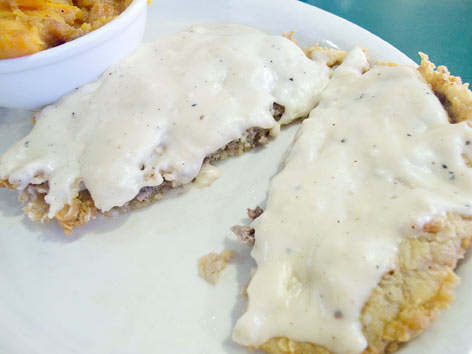 As Texan as the rodeo, chicken-fried steak is widely assumed to have hailed from German immigrants—wiener schnitzel is cooked very similarly; CFS merely substitutes steak (traditionally round steak) for veal and omits the breadcrumbs. The meat is pounded thin or otherwise tenderized, dipped in milk or egg, dredged through a flour-salt-and-pepper mix, and pan-fried—like chicken would be, presumably—in a skillet until crispy and brown. Then, naturally, it’s smothered in a cream gravy traditionally made with pan drippings.

CFS is known as “country-fried steak” in other parts of the South; some claim the former uses an egg wash while the latter uses only milk—regardless, they are pretty similar. Austin may be different from other parts of Texas, but there is no good reason to skip trying this dish when in town.

Where: In Austin proper, one of the best spots around for this dish is Hoover’s Cooking (2002 Manor Rd., map), where the menu’s comfort food ranges from Cajun to Tex-Mex, locavore to BBQ. Bonus: The margaritas are really good, and just $3.50 during happy hour (weekdays, 3pm-7pm).

Order: The chicken-fried steak ($14.99), off the “Southern Pride” menu, comes with three sides. To be perfectly honest, this steak blew our minds a little: perfectly thin, tender beef; an unexpectedly light, fresh, flaky “breading” (courtesy of seasoned flour); creamy, slightly peppery gravy. Purists might not like the fact that this steak is deep-fried, not skillet-fried, but the effect is not at all a heavy-handed greasiness or crunchiness—the fry still feels strangely light and buoyant. And the cream gravy? Addictive.

As for the sides (“house mates”), there’s a lot, and they’re good. Among the best are the candied yam, fried okra, jalapeño-creamed spinach, mac-and-cheese, mustard greens, and black-eyed peas—though mashed potatoes is probably the most traditional accompaniment. We also hear, not surprisingly, that the chicken-fried chicken is excellent here. Loosen your belt and dig in.

Alternatively: You might try quirky Shady Grove (1624 Barton Springs Rd., map), where you can sub green chile sauce and Monterey Jack for the gravy if you wish. For more Texas atmosphere, there is the famous and historic music-venue-cum-restaurant Threadgill’s (two locations including 6416 North Lamar Blvd., map), though the general consensus is that its CFS has gone downhill. (Same goes for fun honky-tonk The Broken Spoke (3201 S. Lamar Blvd., map)—best to stick to the two-stepping and Lone Star pitchers there.) For a fancier take, there’s Z’Tejas (multiple locations including 1110 W. 6th St., map), doing a (slightly controversial) chicken-fried rib eye.