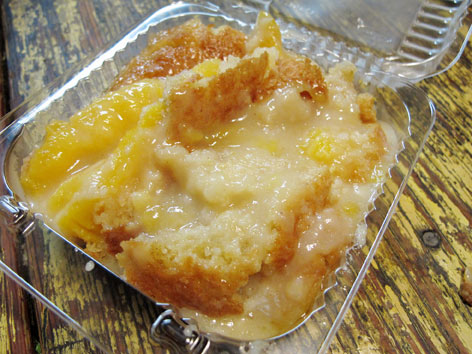 What: Hill Country, the Central Texas area that sweeps west of Austin, is celebrated for its BBQ, Central European heritage, fast-growing wine region, and bucolic setting, which includes lots of wildflowers, pecan trees, and fruits—particularly peaches—during the hotter months. Fredericksburg, about 77 miles west of Austin, is the primary source of those delicious Texas peaches, but all over the area it’s no wonder that sweet peach cobbler has become the default dessert to close out a magnificent BBQ feast. Meanwhile, the native pecan tree has been the state tree of Texas since 1919, with the rich pecan pie achieving similar status on Texans’ dessert tables, particularly around the winter holidays.

Where: Our pictured peach cobbler—ordered to go, due to time restraints—followed a meat fest at the popular Salt Lick BBQ  (18300 Farm to Market Road 1826, map) in Driftwood, 22 miles southwest of Austin; the place also makes a ton of homemade pecan pie.

When: Daily, 11am-10pm. Cash only at Driftwood location (other locations in Round Rock and at the Austin airport).

Order: If you’re here, you’ll have BBQ, of course (we liked the pork ribs best), but you’ll want to sample from the dessert menu as well. The warm peach cobbler ($4.95, $5.95 a la mode; or you can buy a half/whole tray) is really good: a simple, sweet, almost soupy mix of sliced peaches and moist pastry that can only improve with vanilla ice cream on top. (We were disappointed, however, that the peaches weren’t locally sourced. C’mon, guys!) Pecan pie—for which the restaurant does source locally—is available by the slice ($4.95; $5.95 a la mode) or as a whole pie to go ($19.95). The Salt Lick also serves blackberry cobbler during the summer.

Alternatively: Several other of the area’s venerable BBQ spots offer these desserts, including two in Lockhart, 30 miles south of Austin: Black’s Barbecue (215 N. Main St., map), where there’s pecan pie plus peach, blackberry, and cherry cobblers on the menu; and Chisholm Trail BBQ (1323 S. Colorado St., map), which is celebrated for its peach cobbler, but also carries pecan pie and banana pie. In Austin proper, try the “famous” pecan pie at The Old Pecan St. Cafe (310 E. 6th St., map) and peach cobbler at the new Stiles Switch BBQ (6610 N. Lamar Blvd., map), where the banana pudding gets props too.