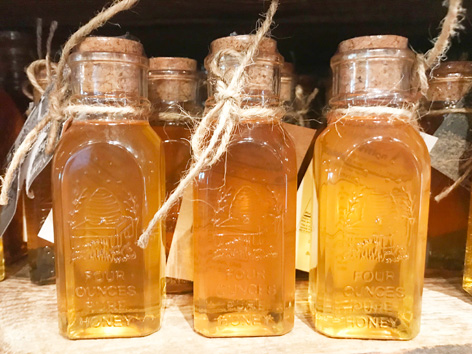 It shouldn’t come as a surprise that the Beehive State produces great honey—but did you know the Utah honeybee has a history with the Church of Jesus Christ of Latter-day Saints?

Colonies of honeybees were brought into the region by Mormon settlers in covered wagons in 1848, as part of the famous Brigham Young-led migration west (aka the Mormon Trail). Young, in fact, reportedly urged his followers to try beekeeping and to use the honey for sweets and medicine (source). Honeybees as a whole were admired by the Mormons for their work ethic and cooperative spirit, qualities they saw ingrained in themselves. The bees became an important part of the region’s agriculture in the decades that followed—in fact, Utah, which became a U.S. state in 1896, was almost named Deseret, a word from the Book of Mormon that means “honeybee.”

Today’s Utah’s four main beekeeping regions encompass the mountains (Wasatch Front), the forest (Uinta Basin), the desert (the Delta), and the far southwest (the Dixie). Each area presents its own challenges, but the primary nectar source remains the same: alfafa and sweetclover. Bees are essential to our ecosystem for many reasons—not least of all being responsible for pollinating countless crops—but the product of so much beehive activity is, of course, that sweet, sweet honey. And if you’re in the Utah Valley, chances are you’ll encounter Utah’s mountain honey.

Good to know: While honeybees are not native to Utah, some 900 species of bees are, making the state home to the most diverse bee population on the continent.

Where: The gorgeous Sundance Mountain Resort (8841 Alpine Loop Scenic Byway, Sundance, map) is a must in this region, whether for a luxurious night’s accommodation, a meal at one of its highly rated restaurants, a hike or ski in its nearby mountains, or a show in its outdoor amphitheater. Among its offerings is the Sundance Deli and store, which sells, among other things, made-to-order sandwiches, baked goods, coffee, the handmade soaps used by the hotel, and little jars of mountain honey.

Order: Pictured are the adorable little 4 oz. jars of mountain honey ($10 each) at the Sundance store. A perfect edible souvenir!

Alternatively: Another great way to try the local honey at Sundance is via a meal at the Foundry Grill, where it’s featured in the charcuterie plate (available at lunch and dinner).