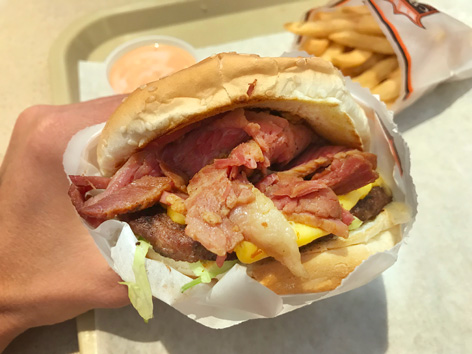 If it seems unnecessary to add meat to meat, you’re probably right. And yet this classic Utah dish, the pastrami burger, pairs a stack of thinly sliced pastrami with a charbroiled quarter-pound beef patty, cheese, tomato, lettuce, onion, and fry sauce (another local concoction that turns out to be equally tasty on burgers as with fries).

According to The New York Times, pastrami burgers likely had their start in Southern California, which seems to be corroborated by the founders of Salt Lake City’s pastrami-burger pioneers, Crown Burger (one founder admits he learned to make them in Los Angeles in the 1960s). But in any case, it’s become “a thing” in the Utah capital, and elsewhere in the state. Many of the fast-food mini-chains that peddle them are Greek-owned, and it’s not uncommon to see gyros on the menu too. The only thing you need to trouble yourself with? Pastrami burger, fries, and fry sauce.

Where: With seven locations in and around SLC, family-owned Crown Burgers is the OG burger joint in a region filled with them, and it’s a great bet for a legit pastrami burger (they make their pastrami in-house). The franchise first opened in 1978, but the Greek family behind it was in the restaurant business for decades before that. We visited the Sandy branch, close to the where SLC meets the Utah Valley (9604 South State St., map).

The counter where you order may resemble a typical McDonald’s, but it’s not quite such “fast food” (a good thing, if you ask us). You’ll get an order number that will be called when yours is ready, which took about five minutes for us.

Order: A “Crown Burger” ($6.79) with fries, and don’t forget to stop at the condiment area for some fry sauce! The fry sauce is also that Thousand Island-like pink sauce on the burger, some kind of mix of ketchup and mayo with something tangy (we heard pickle juice and little relish, but every place is different). It’s quite good.

This burger hit the spot. I was grateful to have young boys to share with, as it’s a lot of meat! But the pastrami was tender and salty, livening up the standard thin patty and accoutrements. It’s worth a detour when in this part of Utah. Also, it’s kind of a rite of passage in this state.