8 Polish Soups Not to Miss

On a recent trip to Krakow—in the dead of winter—I was on a self-imposed mission to explore Polish soups. Not the jazzed-up modern versions that often taste so flat and commercial, but the local ones prepared in the traditional way. The soups you encounter in the small towns and villages many outsiders never get to, the kind that take you straight to the warm, comforting soul of Polish cuisine. The results of my soup-scoping mission? These eight soups that are must-eats for anyone interested in Polish food—or anyone who’s a soup-foodie (soupie?) like me.

Zurek (Sour Rye Soup)
This is probably the first Polish soup you’ll hear of. Zurek (also called zur) has a distinctive sour taste—not a lemon-sour taste, but one that’s more delicate (though it can sometimes be a bit stronger depending on who's cooking). The flavor comes from the fermented rye flour and bread crumbs used to prepare this soup. It’s often garnished with potatoes, kielbasa (sausages), and one or two slices of egg.

Just remember that variations do exist...once I tasted a zurek that was actually slightly sweet, which is not at all the norm! Since then I’ve tasted around for different versions of this soup because, as I’d learned, not all zurek is created equal. 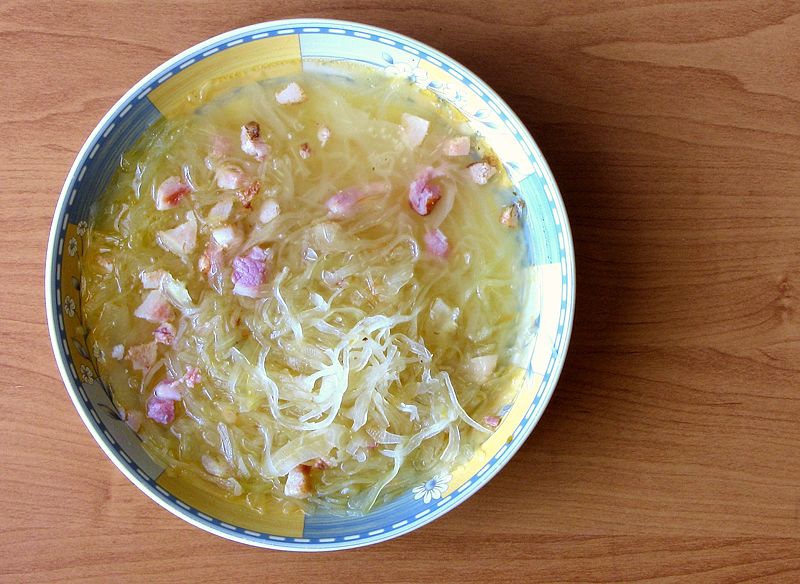 Kapusniak and Kwasnica (Polish Cabbage and Sauerkraut Soup)
Polish soups tend to be healthy in general, but this one is particularly healthy, since it’s mostly raw cabbage. To make it, you need a mix of cabbage and sauerkraut. In some parts of Poland, the cabbage soup is made with sauerkraut only, in which case it’s called kwasnica (and tastes more sour). Zupa kapusniak is typically garnished with bacon pieces and diced kielbasa. 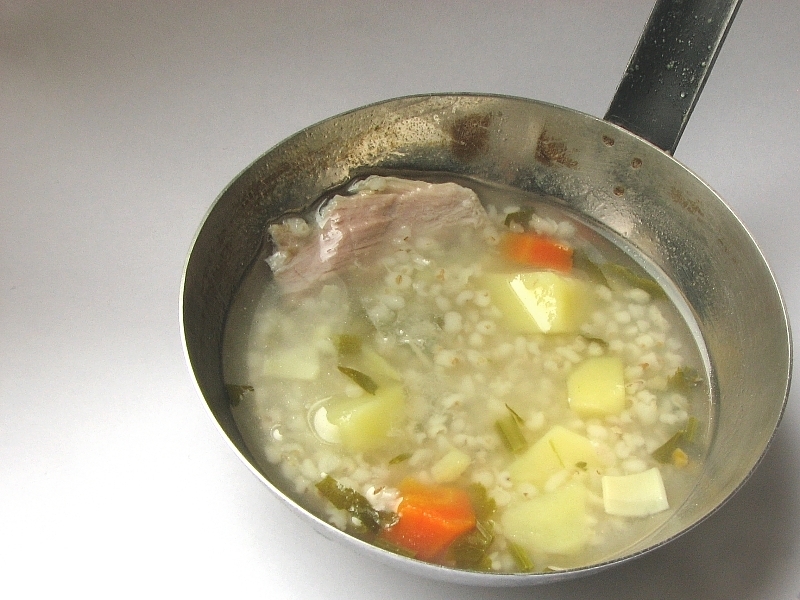 Courtesy Mariuszjbie/Wikimedia Commons
Krupnick (Polish Barley Soup)
One of my favorite Polish soups is krupnick, made from barley. It’s certainly not as colorful as the more famous red beet borscht (barszcz czerwony), but its taste makes up for it. Krupnik soup is made from vegetables or meat stock with barley groats. Sometimes it will be garnished with chunky pieces of cooked meat and potatoes.

As you can see, it’s a very simple soup, made better—as with many Polish soups—with the addition of kielbasa. The perfect soup for a cold winter day. 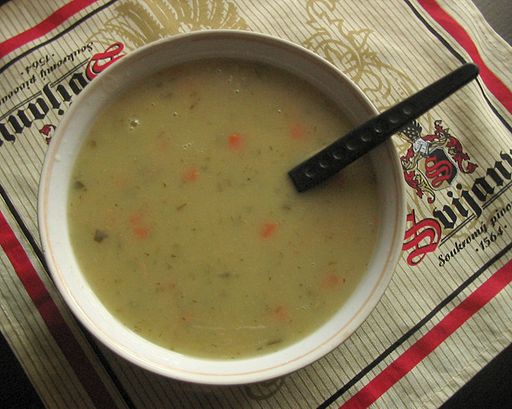 Zupa Ogórkowa (Polish Cucumber Soup)
Cucumber in all its forms is widely eaten in many Polish homes; zupa ogórkowa is just one way to eat it. This is another of those everyday run-of-the-mill soups that doesn’t always make a strong impression because, after all, cucumber is just cucumber! And yet it’s very tasty, and quite healthy. Grated sour pickled cucumbers are cooked with diced boiled potatoes in what’s often a meat stock (vegetarians, take note!), and that’s about it. If you like cucumbers (as I do), this will easily sail to the top of your soup rankings. 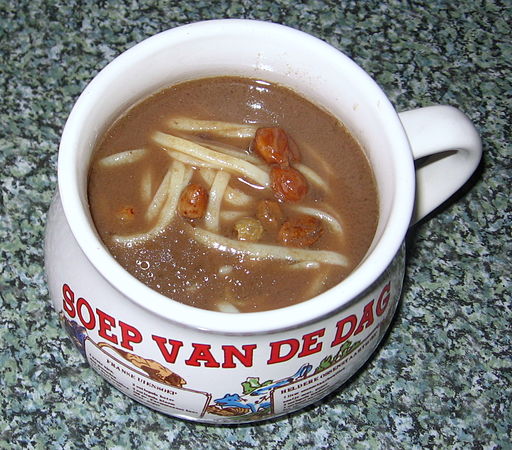 Czarnina or Czarna Polewka (Polish Blood Soup)
The ingredients of this old Polish soup are broth and blood of duck, chicken, or rabbit. If you’re squeamish, it may not be for you, but everyone else may be interested to know that according to tradition, the blood is collected in a bowl with vinegar and stirred vigorously, to prevent coagulation. Nowadays, it’s much easier to just buy it from a butcher (or, better yet, get the soup at a restaurant).

Some argue that czarnina is one of the best Polish soups you’ll ever taste. For others, just the idea of blood, well ...Wherever you fall on that spectrum, know that czarnina has a rich, sweet-and-sour taste because of the sugar and vinegar added to it. It’s typically served with noodles or potatoes; other ingredients that may be added include prunes, apple, cherry, raisins, and meat. Some insist the taste improves the more you reheat it, so if you’re feeling bold, you may want to buy it in quantity and store in your freezer! 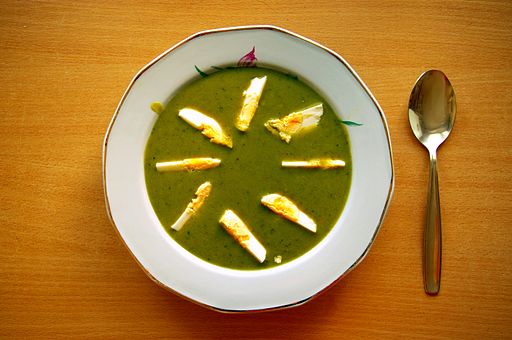 
Barszcz Szczawiowy (Sorrel Soup)
It’s a bit of a mouthful, so just remember this one as “Polish sorrel soup.” It’s made from sorrel leaves and is sometimes referred to in English as shav, or szczaw in Polish. Barszcz szczawiowy is also eaten in Belarus, Slovakia, Russia, and Ukraine.

I tasted this soup just once during my travels in Poland, and I loved it! It’s thicker than zurek, with a bold flavor. The sorrel leaf looks a little like spinach, but the taste is quite distinct, with a delicately sour taste. As with most Polish soups, barszcz szczawiowy is usually cooked with meat stock. You’ll often find potatoes and eggs added as garnish. 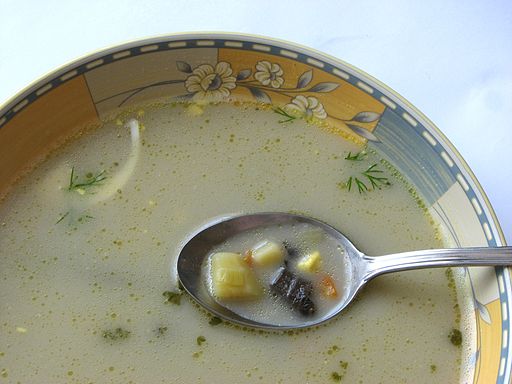 Courtesy Mariuszjbie/Wikimedia Commons
Zupa Grzybowa (Polish Mushroom Soup)
This soup, commonly referred to as barszcz grzybowy and traditionally served for the all-important Polish Christmas Eve dinner, is very dear to the hearts of many Poles. Most times it’s cooked with meat and vegetable stock.

The taste is hard to describe, as many different mushrooms may be used: yellow (chanterelle) mushrooms, boletus, red pine, even white mushrooms. When white mushrooms—the kind that seems to be found in every shop, nearly everywhere in the world—are used, it’s called zupa pieczarkowa. Some mushrooms are more flavorful than others, resulting in more fragrant, earthier-tasting soups. Chances are, if you like mushrooms, you’ll like this soup too!

Zupa Pomidorowa (Tomato Soup)
Zupa pomidorowa, as it’s known in Poland, originated in Italy. I’ve noticed that, more and more, Italian cooking is greatly influencing  Polish cooking, as Poles are generally quite partial to many things Italian, including the food. It’s made with either meat or chicken stock. Very often pomidorowa is served with thick chunks of potato or rice.

This is a bright, thick soup, and truly a hearty dish that can stand alone as a meal because of the rice, potatoes, or carrots often added to it. Easy to love and recommend!


About the author: Edith Nkwocha is a writer/translator and lover of all things food and cooking.