In Search of Hazelnuts on the Black Sea 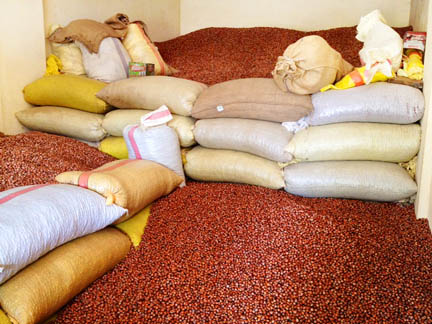 “Merhaba. Findik?” I made the motion of eating something. After one week of travel in Turkey, my Turkish had not improved a whole lot.

Three of the men at the roadside table looked blankly at me, but one caught my drift. He said something rapidly in Turkish and pointed vaguely down the dusty, barren road. I was doubtful but pretended I understood, thanked him profusely, and directed Scott, behind the wheel in our rental car, down the street.

There was only one storefront among the garages that it could possibly be. I repeated my terrible Turkish to the man standing in front of it. He nodded, turned away, and returned to the doorway with cupped hands. They were filled with hazelnuts.

Findik are hazelnuts, and we were driving through findik country, along the Black Sea coast. We hadn’t traveled as far east as Giresun, the city most celebrated for its hazelnut production, but on the road between Ünye and Terme, where we now found ourselves, there were findik fabrikasi (hazelnut factory) signs aplenty. We just wanted a store that sold the damn things.

Instead we seemed to have found a wholesaler. The man waved us in to a small room, dominated by a mountain of hazelnuts barely contained by hefty beige sacks. At the front was a scale and plastic bags; to the left a small office.

He opened up a gray plastic bag of raw peeled hazelnuts and gestured for us to try them. Yep, they were hazelnuts. As good as raw hazelnuts can get.

We agreed to buy a half kilo, and he waved off our attempts to pay him. He asked us questions in Turkish we couldn’t answer. Scott noticed the computer in the office and suggested Google Translate. Cushions were quickly laid out on chairs and tea was ordered from the boy who lingered in the doorway. We would be staying for a while.

His first questions: How old are we and do we have kids? By way of explaining our search for findik, we tried to explain our website. Neighbors came in and laughs were shared, but we didn’t get as far as we’d hoped with the translation—even Turkish Google can’t bridge such a deep communication gap. But in Turkey, tea and hazelnuts go a long way in making new friends.