In the Bahamas, to Conch or Not to Conch?

It’s a famously overexploited, not quite endangered, species. But when conch is on every menu in town, there’s got to be a ton of ’em, right? A look at that beloved Caribbean mollusk, the queen conch—and how to help protect it. 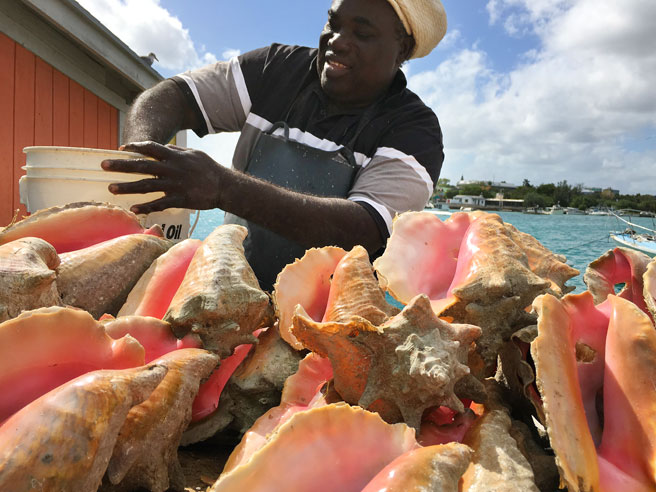 
“Are you feeling conchy tonight?” the waitress inquired with a smile when we wondered aloud about the Bimini conch linguine—a $22 Bahamian take on the traditional Italian clam dish, apparently. We were at a sports bar outside Nassau with friends and our collective flock of young kids, and we’d already had conch fritters and a conch patty earlier that day. The general consensus: Aren’t we always feeling conchy down here?

Conch is everywhere in the Bahamas. The large marine snail—technically a gastropod mollusk—represents a huge part of Bahamian culture. Their gorgeous pink spiral shells are widely peddled on beaches and near food stands. The fleshy, chewy meat shows up on just about every menu you encounter, from upscale sushi restaurants to roadside shacks to the popular Fish Fry eateries in Nassau. Beloved by locals and tourists alike, it’s sliced and diced into fritters, salads, chowder, burgers, pasta, and handheld patties; it’s battered and deep-fried; it’s even scored (“scorched”) and eaten raw. In short, you really can’t come to the Bahamas and not eat the conch—it’s pretty much the national food.

But should you be eating all the conchs? In the U.S., while it’s not listed as endangered despite recent petitions, it’s been illegal to harvest the queen conch (Strombus gigas) in federal waters since 1986, thanks to decades of overfishing off Florida’s coast. Conch fisheries have closed due to overexploitation in plenty of other countries, too (Aruba, Bermuda, Costa Rica, among others); some countries (Jamaica, Cuba) have had to implement repeated moratoriums on conch harvesting; and others, like Bonaire, have given it protected-species status.

The Monterey Bay Aquarium's Seafood Watch program recommends conch only from Honduras, citing that even the second-best options “catch species that are depleted or being overfished” (it also says to avoid conch from the Bahamas). Since 1992, queen conch has been included in the Convention on International Trade in Endangered Species of Wild Fauna and Flora (CITES), which has regulated its trade internationally ever since, in an effort to prevent extinction. It remains kosher in the States, the largest importer of conch, to import from the Bahamas (and elsewhere), which, from our past inquiries in the conch-loving Florida Keys, is what many restaurants there seem to do. But how about the conch population in the Bahamas? How on earth can this rampant conch consumption be sustainable? 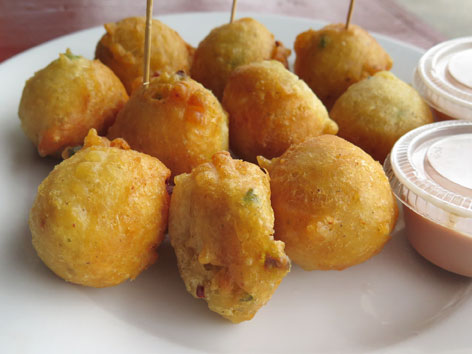 For 65 million years, conchs have dwelled in the warm, mostly shallow waters of our planet. Their habitat of choice is just one factor contributing to their currently dwindling numbers—pollution has led to the degradation of their preferred seagrass beds, and shallow waters, where juveniles in particular cluster, are all too easy for humans to infiltrate. Moreover, these mollusks move slowly, are easily identifiable, and can be harvested by hand or with basic fishing gear, like long hooked poles. Some places, like Puerto Rico and Mexico, actually permit scuba gear, allowing divers to penetrate the conchs’ deeper habitats. They have no line of defense.

Even in Florida, with three decades of stringent protection behind them, conchs are not recovering well. It takes five to six years for a conch to reach sexual maturity, so that’s up to six long years it remains vulnerable to humans and other natural predators (crabs, lobster, sharks) before it can mate and reproduce. In short, it ain’t easy being a conch.

Stock decline in the Bahamas

Of course, the conchs’ Caribbean habitat comprises many countries, all of which view, harvest, and regulate the mollusk differently—depending on whether it’s an artisanal or commercial industry, if the conchs are consumed domestically or mostly exported. The Bahamas falls somewhere in the middle, consuming much locally but boasting a strong export game, too (approximately 35% of its catch)—and it has a lot of conch spread around its 700-plus islands. That probably explains why anytime we brought up the issue of overfishing conch to a Bahamian we were met by incredulity. The general attitude is that there’s more than enough to go around…basically, you can’t walk into the sea without tripping over the things, there’s so many of them. No worries—have yourself another conch fritter! 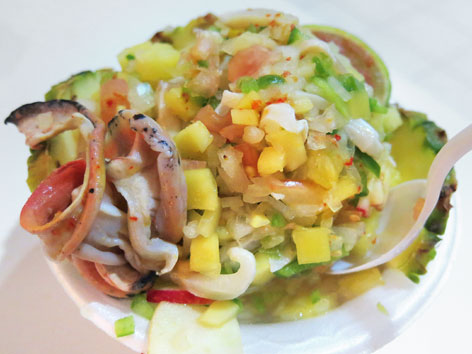 A 2014 status report filed by the National Marine Fisheries Service (aka NOAA Fisheries) references several 2009-2013 studies that concluded various parts of the Bahamas showed undeniable signs of overexploitation. Moreover, it notes that conch landings may be “grossly underreported” here, rendering data unreliable (the numbers don’t, for example, account for large-scale foreign poaching and unreported harvests). But the status report also includes this quote, taken from a 1999 study: “Because the Bahamas is a large group of islands with a substantial conch population, it is generally believed that exploitation is low and spread over the entire stock.” And that’s the belief most deeply embedded in Bahamians’ minds today, Martha Davis, a marine conservationist who participated in the later studies and the director of Community Conch—a nonprofit research group dedicated to conch sustainability in the Bahamas—tells me over email. Problem is, that thinking is 20 years old.

But the tide might be turning. There's more awareness now than ever before, thanks to increased studies and the "Conchservation" campaign launched in 2013 by the Bahamas National Trust and its partners, including Community Conch, which hopes to transform the Bahamian queen conch fishery into a truly sustainable one—for economic reasons just as much as environmental ones. Aiming to educate both consumers and fishermen, the campaign is largely focused on a specific threat to the conch population: the all-too-common practice of harvesting juveniles before they’ve had the chance to reproduce. Since conch is eaten on a daily basis in the Bahamas, this “means thousands of new conchs will never be born,” Bahamas National Trust chairman Eric Carey told Tribune 242, a Nassau-based daily newspaper, in April 2015. 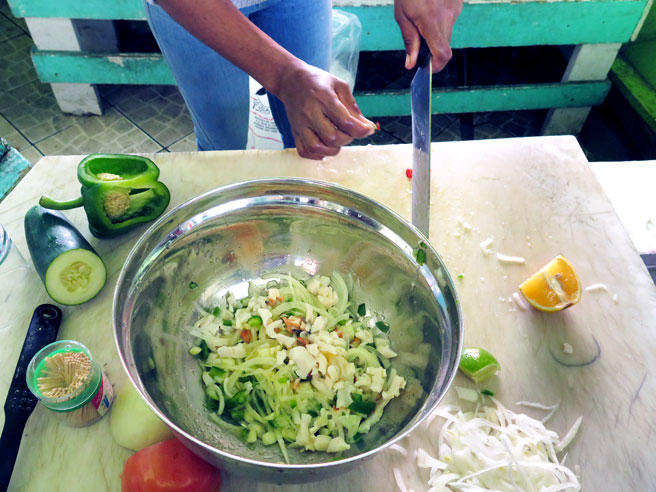 Making of a conch salad, on Potter's Cay


What we can do

So where does this leave the typical tourist to the Bahamas? Thankfully, no one is saying we must avoid conch here—at least not yet. But there is one major thing we can do: Eat adult conch only. “The only way to know is to see it in the shell before it is removed from the shell, or ‘knocked,’” Davis tells me. She suggests going to Potter's Cay in Nassau, under the bridge to Paradise Island, and to other fresh conch shacks throughout the Bahamas where you can ask to see the conch before it’s sliced and diced into a salad. (Incidentally, we also suggest eating at these places, because of their inherent delicious, authentic awesomeness.)

How to tell whether a conch is full-grown? Look for “a well-formed, fully flared lip," Davis advises. “The pink lip of the conch should be flared out and the lip should be thick, not paper-thin.” And it goes without saying that you shouldn’t be buying any non-adult conch shells, either. (See some images of juvenile conchs here.)

It’s not the easiest ask of the vacationing masses—have you met the rowdy, tipsy cruise-shippers in downtown Nassau?—but those in the know can do their small part to help preserve this important socioeconomic and ecological resource. The Bahamas would lose more than its national food if it lost its conch; it’d lose a national symbol, a way of life, a piece of its identify. And you know what? That conch linguine, brought to the table sight unseen from the restaurant’s kitchen, had nothing on a spicy conch salad—fresh out of its adult-size shell. 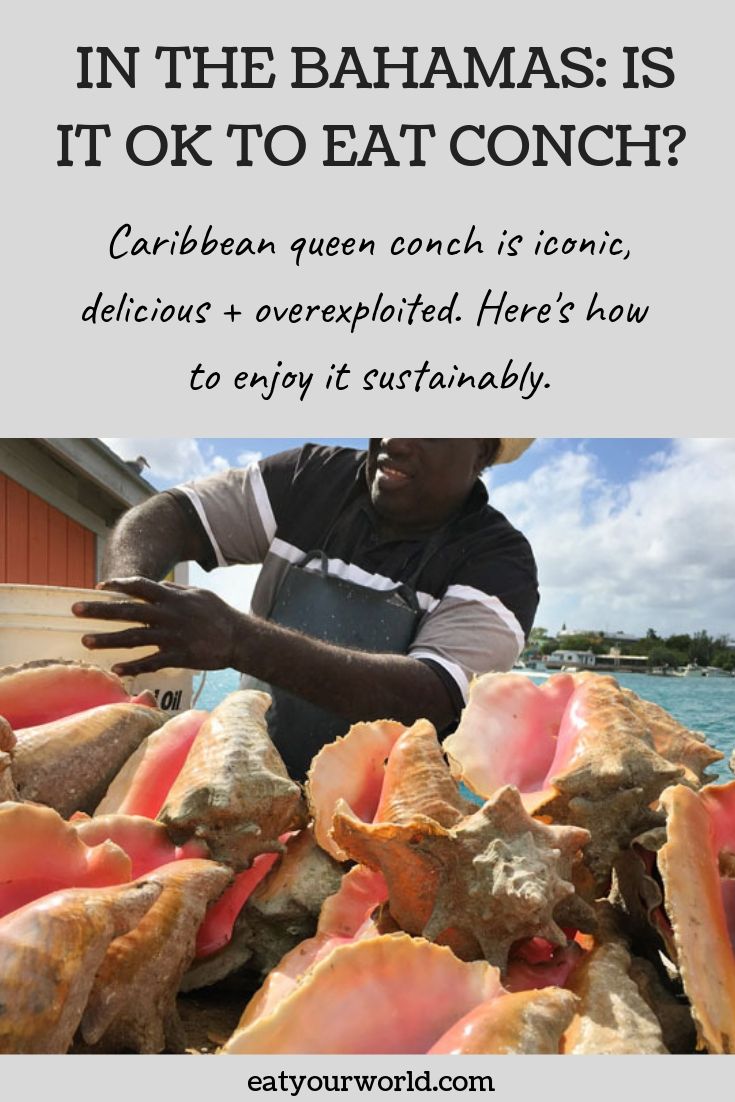 This story was updated in January 2018.