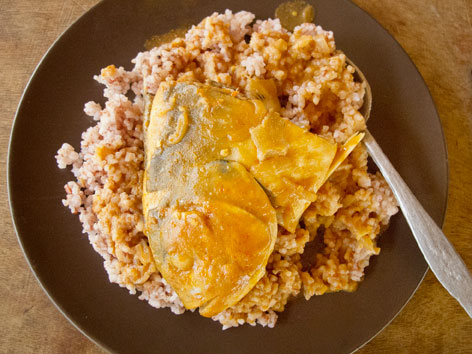 What: Along with the various plasas, groundnut soup or stew is the “chop” you’re most likely to encounter at a Sierra Leonean restaurant. Groundnuts, which many of us know as peanuts, are ground into a paste and seasoned with chopped onion, chilies (called “peppers” here), tomato paste, some Maggi stock cubes, and meat or fish. The distinction between groundnut soup and stew is that for the latter, the onions and meat/fish are cooked separately with palm oil before going into the groundnut paste—whereas in the soup, you have only the oil from the groundnuts themselves, not palm oil. (You do not, however, eat it as you would a typical soup—both groundnut soup and stew are eaten over rice.) Both versions yield a nutty, spicy, satisfying sauce, though we recommend the soup over the stew if you have a choice, as the former is inherently healthier (and plenty oily on its own).

Where: Our groundnut soup is from the lovely-lady cooks at community eco-venture Tribewanted (232-78290578 or 232-78738583; John Obey beach) on stunning John Obey beach, south along the Freetown Peninsula. We were fortunate to stay there a couple of days, but non-guests are permitted to request lunch (best to call ahead to be sure there’s enough food; they cook one big lunch for all guests and village workers). We suggest you stay at least one night there, though. In fact, the beachside setting is so spectacular, you won’t want to leave—fortunately, there are tents, bungalows, and huts for that.

When: Lunch is typically served around 1pm, but you have to arrive early or phone ahead to order lunch.

Order: On the days when groundnut soup (Le35,000 for non-guests) is served here, it’s always prepared with local fish—typically on the bone, although not everybody got a head like us—and served alongside a generous heap of country rice, the hearty, nutrient-rich local grain. It’s deliciously spicy and peanutty and filling—perfect fuel for an afternoon of swimming and hiking in the area.

Alternatively: You can find groundnut soup at just about any local Salone eatery, even one confined to a 12-square-meter tropical island: About four or five hours southeast of Freetown, the resourceful village chef at Tiwai Island Wildlife Sanctuary (Tiwai Island, map)—a solar-powered community conservation program in the tranquil Moa River, where you can camp in stunning surrounds amid primates—made an especially tasty version of this dish, with some thyme and bay leaves he managed to get his hands on (as we said, he’s resourceful). We also had a nice, particularly nutty version of this on the breezy terrace of Black and White (Kissy Town Rd., map), in Bo.