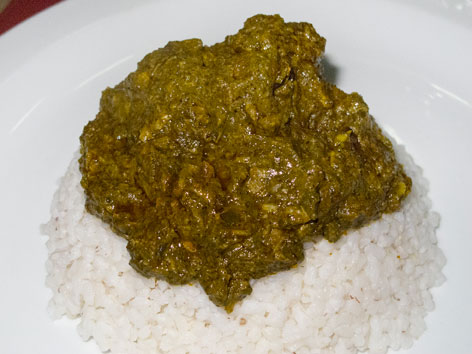 Sierra Leone’s plasas, or palaver sauces, are stews made with various green leaves, and they're essential to the country's cuisine. The leaves are boiled and cooked with oil (usually red palm oil, but sometimes coconut or groundnut oil), hot chilies (aka “peppers”), onion, meat and/or fish, and ever-present stock cubes (such as Maggi), served over rice. To the uninitiated, the many types of plasas will seem interchangeable. But we are lumping them together here for convenience’s sake only: Each is actually prepared in a different manner, and has a distinct taste.

Types of plasas in Sierra Leone

Cassava leaf plasa (pictured) has pounded and shredded cassava leaves, typically added to the pot before the meat or fish. For (sweet) potato leaf plasa, the leaves are sliced up and thrown in after the meat, so it’s cooked less and retains more of a chewy al dente-ness. Crain crain leaves (aka krain krain/jute leaves/draw soup) are stemmed, cut finely, boiled, and cooked generally to death, so its texture is (intentionally) slimy. And the leaf known simply as “green” is cut the biggest; you can still decipher and taste the leaf itself.

Confused? If you spend just a few days in this country—or elsewhere in West Africa, including Ghana, Gambia, Nigeria, and Liberia, where they’re also common—you’ll likely become intimate with all of the plasas. It’s good chop, and definitely what you should be eating while in Sierra Leone.

Good to know: Some of these plasas, particularly cassava and potato leaf, are traditionally made with some additional ingredients, according to What’s Cooking Today, by Muriel Emekunle Davies, one of very few published cookbooks on Sierra Leonean cuisine. Groundnut (peanut) paste or okra—both acting as thickeners—and broad beans are among the common add-ins. Moreover, provided the book’s mention of Maggi cubes as an alternative ingredient, we can guess what might have been used here before the Nestlé giant arrived in town: ogeri, which is fermented sesame seeds, or sounbareh, the fermented, roasted, ground seeds of the African locust tree (also called kainda in Krio). (Source here. Read more about the ubiquitous use of Maggi bouillon cubes in West African cooking on the blog.)

Where: Cassava leaf is often heralded as the tastiest of the plasas, and we agree after trying it at Freetown’s long-running Balmaya (078-919750; 32B Main Motor Rd., Congo Cross, map), an airy restaurant with a lovely veranda and an attached high-end African art gallery. But credit is due to the chef here, who takes pains to cook with fresh ingredients (read: no Maggi cubes), use the superior (and pricier) local country rice, and cut back, at least a little, on the bitter red palm oil. Prices are higher here than at typical food shacks around the country, but quality follows suit.

Good to know: Cassava leaf is most typically served on Mondays; potato leaves on Tuesdays; crain crain on Thursdays. Balmaya doesn’t necessarily follow this schedule, but many restaurants across the country will.

Alternatively: In Freetown we also liked Jakkah’s Restaurant (030-328-113/033-328-113; 4 George St., map), where the delicious potato-leaf stew was made with goat meat and white rice; and we’ve heard the beckoning Come for Lunch (no phone; near the Lumley roundabout, map) is a reliable local bet.

Moving farther south along the gorgeous Freetown Peninsula’s coastline, the terrific cooks at community eco-venture Tribewanted (John Obey beach, map) regularly served plasas in addition to other great Salone lunch dishes, always over country rice, when we visited there. Ownership has changed in the time since, but the local managers are still operating the property. (To inquire, contact Fatorma at ibrahimfatorma2008 AT yahoo dot com or +232 786 26293, or Daniel at danielmacauley75 AT yahoo dot com or +232 301 77007 / +232 783 88767.)

Along the eastern highway toward Bo, the restaurant at Moyamba Junction, Fakunya Chiefdom Canteen (map), usually has some plasas on offer at low prices (Le4,000, or just over US$1); our crain crain there was properly oily and slimy, with meat and broad beans in the mix.