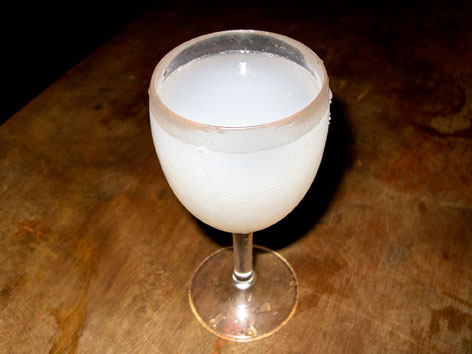 What: Poyo is palm wine, Salone’s favorite native adult beverage. Though it is traditionally not distilled or fermented or mixed with anything—it is meant to be drunk straight outta the tree, “from God to man,” as they say here—it is mildly alcoholic, probably about 1% alcohol. The men who climb up tall palm trees to tap them know exactly where, when, and how to get out the good stuff, and any Sierra Leonean worth his salt has a trustworthy poyo man—that is, someone who doesn’t mix any water or sugar or other frowned-upon impurities into the jerry cans in which poyo is transported and sold. (This is one reason why it’s common knowledge that you don’t drink poyo in Freetown; it’s never any good there. Got to go out to where the trees have a little breathing room.)

As for how this godly beverage tastes: woody and a bit sour. Palm wine’s natural fermentation gives it a little tang, which grows more pronounced the longer it’s out of the tree. Milky-white in color, it’s surprisingly thin and almost frothy when fresh, which is how you want to taste it. It takes a little getting used to, but soon you’ll find it surprisingly easy to throw back mugs with the best of them.

Where: Guests who stay at community eco-venture Tribewanted (232-78290578 or 232-78738583; John Obey beach), on stunning John Obey beach, south along the Freetown Peninsula, get spoiled with fresh poyo, free of charge. A poyo connoisseur we know tasted it here and attested to its pureness (what he actually said was that he’d drive down from Freetown just to drink some). Note: Palm wine is not typically served or consumed in a proper wine glass; we just felt like being fancy with it!

When: There’s almost always a fresh jug of the stuff. It usually arrives in the morning.

Alternatively: You want to try poyo from a trusted source, so we wouldn’t recommend experimenting at random with the stuff. Asking a local friend in the know is your best bet—unless you’re in Freetown, in which case you should just skip it.