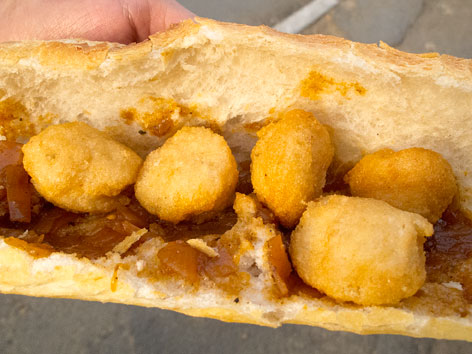 A common street food in Senegal and other parts of West Africa, accara are crispy black-eyed-bean fritters, usually served with a tomato-and-onion-based hot sauce called kaani. It’s not a stretch to consider them (as well as the similar Brazilian acarajé fritters) a precursor to Southern hush puppies, or even similar to falafel in a way. Fried fritters around the world, unite!

Where: We found our accara, ingeniously sold stuffed into a baguette, at a street stall on Rue Joris, not far from where you catch the ferry to Île de Gorée. The female vendor was set up across the street from No. 4 Rue Joris with a table and two covered metal bowls.

When: This vendor did not hold specific hours, and is not always set up in the same spot. However, if you’re in the area and ask for accara, someone will likely know where she (or another vendor) is.

Order: This accara sandwich (500 CFA) was delicious, served on a crusty baguette with oniony sauce. The fritters themselves tasted fresh and moist, not at all dried out. So tasty we had to have another! This vendor also sold fataya with kaani sauce.

Alternatively: Our first encounter with accara came from an impromptu invite into a local’s backyard, where a birthday party was underway. But out in the city, the best place to find this snack is during the day at Marché Sandaga (Ave. Emil Badiane, map), a sprawling open-air market that’s also great for souvenir shopping. (You might have to ask for assistance finding a vendor, as there’s a lot going on there.)