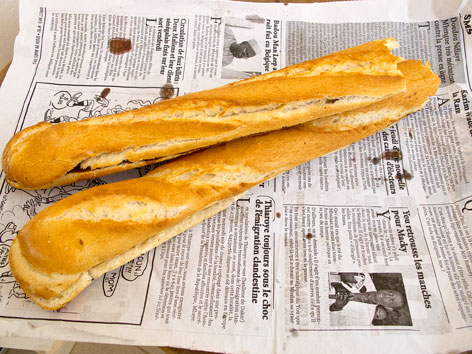 What: Thanks to the French, who occupied Senegal until 1960, baguette stands are a common sight on the streets of Dakar, and sandwiches on long, skinny pieces of bread a popular cheap breakfast. At its most basic, the classic Dakarois street breakfast is a baguette spread with butter or a peanut-chocolate spread (like a thinner version of Nutella), eaten on the street with a café Touba or wrapped in newspaper to go. A step up from that is a hot sandwich, filled with cooked eggs—always a greasy, salty, tasty affair. They’re familiar foods that are often served in wooden stands, unmarked storefronts, or makeshift thatched-wall street shacks, making them an adventure to track down and try.

Where: These baguettes came from a high-ceilinged unnamed storefront stocked with shelves of cookies and canned goods—like many, the front of it consisted only of a counter—off Rue 10 in Amitie, just north of Youssou N’Dour’s famed club Thiossane. It’s located near Rue A on Rue 10’s service road, right around the corner from where we drank our café Touba.

When: Look for baguette stands, counters (generally identifiable by the pile of bread on the counter), and shacks (the toughest to find, but look for thatched walls and women cooking) to be open every morning.

Order: A baguette et beurre (and butter) or et chocolat (and chocolate, which is actually peanut-chocolate). These skinny baguettes (100 CFA), wrapped in newspaper, were fresh and crunchy, the best ones we had in Dakar. The chocolate spread is not quite as rich as Nutella, but will satisfy a sweet tooth, while the butter, of course, is a more savory option.

Alternatively: Look for baguette sellers in the morning, and keep in mind that many of the wooden stalls and storefronts will only offer baguettes plain or with these basic spreads. You have to find a street shack for cooked egg, or oeuf, sandwiches. Our favorites were on Rue D (Amitie A-B, approximate map), within the walled confines of a little thatched hut—where a woman practically deep-fried her egg-and-onion omelets in a shallow pan before dumping them into bread spread with pimόn, or spicy sauce—and on Rue 10, across from the Chez Anthiou club (approximate map), where we found another shack serving healthier hard-boiled-egg sandwiches (as well as sandwiches stuffed with cold spaghetti, which were quite popular with the other patrons). You can also often find omelet and other hot sandwiches (merguez, steak, etc.) at fast-food joints, like Star Burger (Amitie 2 Villa 4064, opposite Hospital Gaspard Camara, map)—we discovered the pain omelet, with salty egg and frites (french fry), made especially good hangover food.