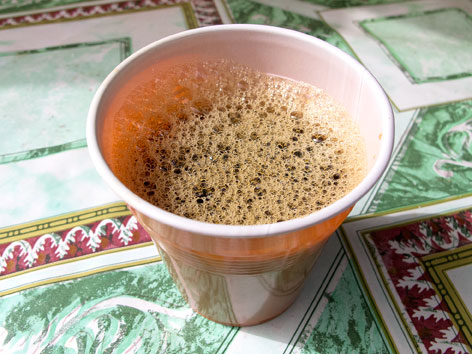 What: Between the ubiquitous roving Nescafe vendors and innumerable café Touba stands, it’s safe to call Senegal a coffee-drinking culture, but unfortunately none of the coffee is terribly good (and even if it were, you could hardly tell underneath all the sugar). Nescafe gets the job done, of course—and buying a tiny plastic cup of sweet, mixed-to-order instant coffee from a mobile cart is always a novel pleasure—but café Touba is at least more interesting, and at times pretty tasty. It’s coffee with a kick, in which the coffee beans are ground with djar, an African black pepper said to have stomach-settling and aphrodisiacal qualities, and served with a lot of sugar (no milk), yielding a sweet and spicy, intense, almost medicinal cup of joe.

Café Touba was purportedly invented by a venerated mystic named Cheikh Amadou Bamba, who founded the Mouride Brotherhood, a branch of Sufi Islam and the only Islamic brotherhood to be founded by a Senegalese—and the city of Touba as its holy site—in the 1880s. Also known as Saint Touba, Bamba is said to have mixed the coffee and spices together for medicinal purposes, and served it to his followers. (It’s possible he started doing this in Gabon, where the French exiled him around the turn of the 20th century, but then brought the idea back with him to Senegal.)

We heard the beans used for café Touba tend to be low-quality Côte d’Ivoire imports, as the taste is easily masked by the sugar and the pepper’s spicy pungency. This would explain why quality varied widely wherever we tasted the stuff—sometimes it’s fresh and lively; sometimes it’s downright hard to choke down. You never know what you’ll get, so it’s worth trying it a few times.

Good to know: Chances are, you won’t have to go far in Dakar to see a likeness of Bamba, who—thanks to the one surviving photo of the man—is always depicted wearing a long headscarf swept in front of and partially hiding his face.

Where: These Touba stands are really a dime a dozen around Dakar. Pictured is the standard pink-cup offering from a turquoise-painted stand near where we stayed off Rue 10 in Amitie, just north of Youssou N’Dour’s famed club Thiossane. It’s located near Rue A on Rue 10’s service road.

When: No exact hours, but Touba stands are usually open in the morning through to the afternoon.

Order: Café Touba (50 CFA). This was an intense one, very sweet and very spicy. It’s a good idea to have a bottle of water on hand for your first cup!

Alternatively: Try any stand, anywhere, though we will admit we found the café Touba better outside Dakar. (Our favorite Touba came from the seaside village of Popenguine, about an hour south of the capital.)