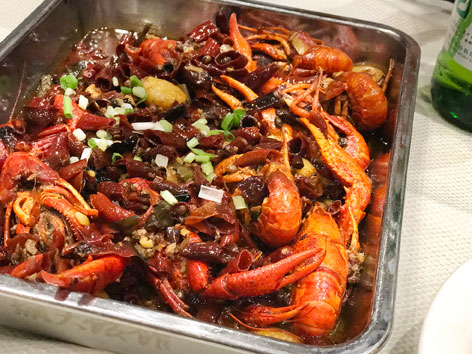 What: In a city that’s a half-day trip from the coast and miles away from the nearest river, you might guess that crayfish isn’t exactly a native specialty. And you’d be right; the crustaceans are most closely associated with Hunan province in the far south of China, a place best known for its almost painfully spicy cuisine. But while originally a novelty in Beijing, peel-your-own crayfish restaurants have now become a local institution in and of themselves, and they’re almost exclusively located along a single two-block street called Gui Jie (“Ghost Street,” 簋街), not far from the Lama Temple.

Good to know: After a day wandering the quiet hutongs, Gui Jie can be a real shock. Prepare to be dazzled by bright neon signs and the most red lanterns you’ve ever seen in one place, and cover your ears as you pass by the touts dressed up like ancient heroes and mythical gods, shouting themselves hoarse inviting customers to their restaurants. There’s no place in Beijing quite like Gui Jie, especially in the summer, when it becomes one of the city’s most crowded nighttime hotspots. But no matter what time of year you visit, you’re guaranteed to find a bustling scene, with couples out on dates, friends gathering for reunions, and businessmen looking to show their clients a good time.

Where: The king of Gui Jie is without a doubt Hu Da (胡大), with not one but four locations at different points along the street. Each is easily spotted by its enormous red sign and by the crowds waiting outside for a table, munching on corn chips and sunflower seeds. But we found that the No. 5 location (or “di wu fen dian”; 第五分店, 218 Dongzhimen Nei Dajie, 东直门内大街218号, map–you’ll find there is no No. 4, presumably because it’s considered an unlucky number) had not only the shortest wait, but also was the most opulent, with soaring red pillars, elaborately carved balustrades, and, most important, immaculately clean bathrooms.

Order: In addition to the classic hot-and-spicy flavor (ma la, 麻辣), Hu Da offers milder braised (hong shao, 红烧) and garlic (suan tai, 蒜台) varieties as well. There’s a minimum order of 10 crayfish if you’re going with the spicy kind and 20 for the other flavors. You can choose the size of crayfish you’d like as well, with the price each ranging between 5, 7, and 10 RMB, though honestly we couldn’t really tell the difference.

Your crayfish will arrive in a wide metal tray, smothered with dark red chili peppers and hefty cloves of garlic. Arm yourself with a pair of plastic gloves, and dig in. It won’t take long to get into the rhythm of shucking your crayfish–the meat is mostly in the tail, so snap it off and pull back the shell to get at the good stuff.

If you can’t take the heat, you’re not alone–feel free to join in the theatrical howls from the burning tongues all around you. You might even say that if you’re not shouting “tai la le!” (“too spicy!”), you’re not really getting the most out of your crayfish dinner!

Alternatively: While overshadowed by Hu Da’s reputation, Zai Zai (181 Dongzhimen Nei Dajie, 东直门内大街181号) also serves up a decent dish of crayfish, and definitely wins the competition for the most garish, neon-lit storefront display. The big floor-to-ceiling windows are particularly great for watching the parade of passersby on this top people-watching street.