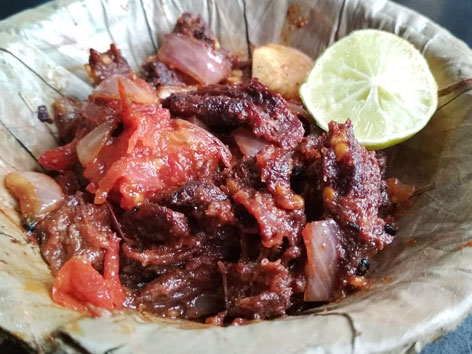 If you like beef jerky, you'll like this one: Sukuti is an air-dried meat dish, usually made from buffalo meat, but sometimes also from chicken, duck, lamb, or goat. Thin strips of lean meat are hung above a fire for a few days to dry; before it is dried, the meat is pounded with a mix of ginger, garlic, onion and tomato, for flavor. Some people add spices like cumin, pepper, and chili powder to their meat before drying it, but in its simplest dried form, sukuti is a little like beef jerky in taste and texture. It can also be rehydrated by adding it to curry. Buffalo—which tastes similar to beef—is the preferred meat for sukuti, as many Nepalis won’t eat beef for religious reasons. Sukuti is a popular snack throughout Nepal, and can be found everywhere from hole-in-the-wall street-side stalls to sit-down restaurants.

Good to know: Despite the two primary religions in Nepal being Hinduism and Buddhism, the majority of Nepalis are not vegetarians. Some castes/communities avoid certain types of meat, but in general, meat is popular in Nepal and various meat dishes can be found not just in the more cosmopolitan capital city, but everywhere.

When: There are apparently no official opening hours at this place, but it is generally open from late morning until evening.

Order: Pictured is buffalo sukuti (Rs 150) on a tapari, or bowl made out of leaves, which are common vessels for takeaway food. This is a slightly softer version of sukuti, as it had been cooked up with some oil, onions, and tomatoes, and is partially rehydrated. It’s commonly eaten alone as a snack (the drier version may be taken on long bus journeys or hikes for energy and sustenance).

Alternatively: For a slightly more upmarket venue, we’ve heard good things about the sukuti served at The Bakery Café (multiple locations, see map). This Kathmandu chain restaurant employs deaf people, in order to provide a good livelihood for people who would otherwise struggle to find meaningful work in the city. Its Western and Nepali snacks are reliable, and the ambience is vaguely American diner.