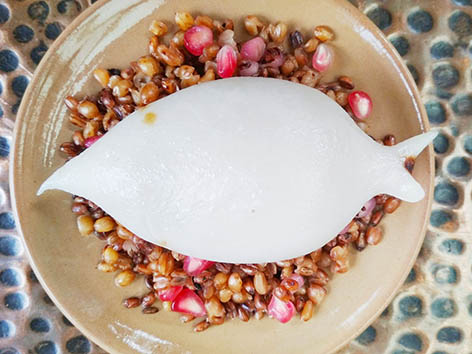 What: How cool are these? Yomari are a steamed sweet rice-dumpling snack made by the Newari ethnic community, mainly associated with a festival in December held in their honor, Yomari Punhi. During this festival, which marks the end of the rice harvest, women make the fluffy dumplings that (vaguely) resemble fish. They’re made from homemade rice flour stuffed with jaggery, sesame paste or coconut fillings, and steamed. Why they’re shaped like fish is unknown (or lost to history), although special attention is paid to shaping the “tail,” as it is believed that the longer the tail, the shorter the winter will be.

During the festival, yomari are offered to the gods, and also enjoyed with friends and relatives. Luckily for visitors to Kathmandu, there are select places to get this festival food any time of the year. While Nepali cuisine is full of savoury meals and snacks, yomari are a rarer sweet treat, and definitely worth seeking out while in Kathmandu.

Where: On Pulchowk Road in Patan, The Village Café (977-1-5540712; Pulchowk, Patan 44601, map) is run by Newari women, and serves an almost endless menu of Newari meals and snacks. It is one of the only places where yomari can be ordered year-round. The handmade snacks are served with a variety of traditional and not-so-traditional fillings: Chaku yomari are filled with molasses and sesame paste; khuwa yomari with dried condensed milk, raisin, cashew, and coconut; masala yomari come with masala spices. There’s even a chocolate yomari filled (and topped) with chocolate and, building on that, a yomaree Sunday [sic], which adds ice cream and nuts.

Good to know: The service at The Village Café is notoriously slow, so don’t come if you’re in a hurry. But the spacious outdoor seating and extensive menu is ideal for a leisurely lunch. There’s a fair-trade handicraft shop located below.

Order: Pictured are the chaku yomari (RS 60), which are filled with a sweet, rich sesame seed paste and condensed milk. You get two pieces per order. Yomari can be enjoyed alone as a sweet snack, or as a dessert after a main meal. And don’t overlook the cafe’s fixed set meals that include curries, beaten rice, and other savory dishes, plus a yomari.

Alternatively: We’ve heard great things about the down-to-earth Newari food (including yomari) and ambience at Nandini Food Court (Swotha Rd, Patan 44600, map), just a short walk from the Patan Durbar Square. If you want to try yomari at home, wherever you’re staying, you can buy packs of two at the Bhat Bhateni Supermarket (Krishna Galli Road, Patan, map), supplied by none other than The Village Café.