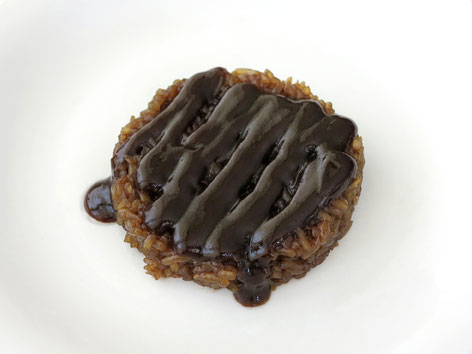 What: A popular Filipino dessert, biko (“bee-koh”) is a delicious cake made of sticky (glutinous) rice, coconut milk, and sugar, usually topped with a caramelized coconut-milk-and-sugar reduction called latik (“lah-tik”). It’s generally served for merienda (afternoon snack) or as a dessert. Biko appears everywhere in the Philippines and no one seems to question its origins—but it’s probably from China, where rice is believed to have been first cultivated as a domestic crop.

Now, there are as many biko variations as there are grandmothers in Cebu, but fortunately, you don’t have to raid anyone’s grandma’s pantry to find it, as biko is widely available in restaurants that serve Filipino/Cebuano food. It’s so simple yet so good—it’ll be an immediate addition to your favorite-comfort-foods list.

Where: Chika-an sa Cebu (032-233-0350; Salinas Dr., Lahug, map) has been serving quality Cebuano cuisine for more than 30 years and nearly always carries biko on its menu.

Order: You really wouldn’t hit Chika-an only for biko, as the restaurant has such good local food. Do happily swim through dinner before earning your biko for dessert. You might try the utan bisaya, a light vegetable soup; pinakbet (“pee-nak-bet”), a northern Philippines dish of sautéed okra, eggplant, tomatoes, squash, snake beans, and shrimp paste; grilled liempo, or pork belly; buttered chicken; lots of plain rice. And then finally, biko: warm, chewy rice slathered with sweet, sticky latik. The perfect ending. (Note that the color of the latik on top can vary from dark brown, as pictured here, to light.)

Alternatively: Head to a Catholic church on a Sunday—not necessarily for the services, but for the food. Vendors usually line the exterior of Redemptorist Church (Queen’s Road, map) as well as the Carmelite Monastery (Mabolo, map), displaying their wares on woven trays, shaded from the sun by colorful umbrellas. Take your time and take your pick—biko and its rice-cake cousins come in many shapes and colors. (Clearly, having a sweet tooth is not a sin around here!)