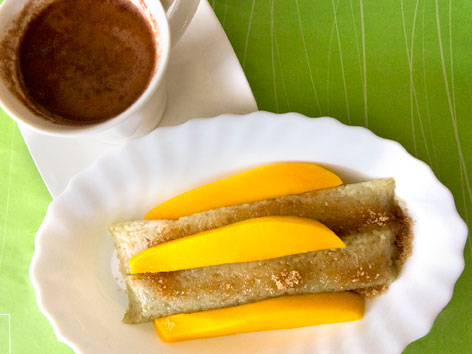 What: Budbud (“bood-bod”) is usually a rice cake snack or dessert wrapped in banana leaves, while pilit (“pee-lit”), which means “to stick,” refers to the variety of glutinous/sticky rice that’s used in budbud pilit. It’s the simplest item in the Filipino (sweet) rice-cake universe, using just coconut milk, sugar, and salt as flavoring agents. The rice is cooked over low heat before being wrapped in wilted banana leaves and steamed, with the leaves imparting a distinct aroma as well as a greenish tint.

Where: One of the best places to experience pilit is at Laguna Garden Café (Biliran Rd., The Terraces, Ayala Center Cebu, map), where the budbud pilit is paired with ripe mangos and hot chocolate.

Order: Flip to the merienda (snacks) page of the Tagalog-language menu to find suman, mangga at tsokolate (Php 120), which translates to pilit, mangga ug sikwate in Cebuano/Bisaya (see also: mangga; sikwate). Forget the semantics and get lost in this heavenly snack instead: The chewy, aromatic pilit, sprinkled with brown sugar, is sandwiched between slices of sweet, succulent ripe mango and served with a small cup of tsokolate (a.k.a. sikwate): rich, velvety, slightly bitter hot sipping chocolate. To try other delectable bites here, we suggest you order the Filipino High Tea, which comes as a tiered sampling of sweet and savory snacks, including three kinds of rice cakes—espasol, shaped like logs and dusted with toasted rice flour; puto, which have a base of steamed rice flour; and bibingka, which are cooked using hot coals over and above the rice-batter mix—plus banana turon (cooking bananas fried like spring rolls) and a pot of pandan tea. The Laguna group is known for its authentic Filipino Food, so you might want to stay for dinner as well!

Alternatively: Café Laguna (The Terraces, Ayala Center Cebu, map), just across the street from Laguna Garden Café, is run by the same company and has a nearly identical menu, including this wonderful snack set with budbud pilit. Additionally, a stall in the basement grocery section of Metro Department Store (also in Ayala Center Cebu, map) sells pilit and various other native* snacks. Pilit and its rice-cake cousins are also sold in markets, churchyards, and random street corners—just keep an eye out for shiny, dark-green bundles stacked in a crisscrossed pattern.

*The word “native” might have politically incorrect undertones, but in the context of Filipino food, it refers to non-Western dishes and food items. Quite a few restaurants brand themselves as “native” to mean that they serve authentic local food.