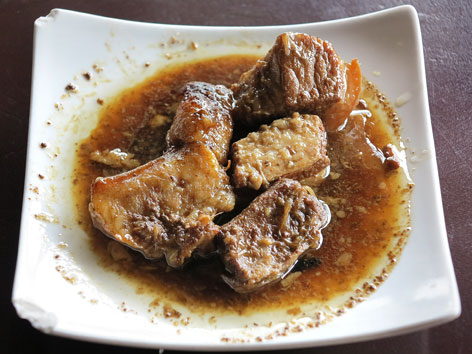 What: Humba (“hoom-bah”) is a stew of liempo, or pork belly, mixed with brown sugar, vinegar, soy sauce, garlic, salt, whole peppercorns, star anise, bay leaves, banana blossoms, water, and tausi (fermented black beans); often, hard-boiled eggs will join the protein party, too. It is both daily fare and festive fare, popular for family gatherings like birthdays, and a dish that Cebuanos love to call their own—so many are surprised when its Chinese origins are revealed. But it’s true: The Fujian Chinese are behind this one, calling it hong ba or hong bak. Sometimes misidentified as “Cebu’s version of adobo” (what many claim is the Philippines’ national dish), humba has at least one important distinction, containing the telltale tausi (and, usually, banana blossoms), which adobo lacks. To taste humba is to know for sure that adobo it is not—the intense saltiness of the tausi and the distinct aroma of banana blossoms complement the melt-in-your-mouth pork. It’s sweet, a little sour, and pleasantly salty all at once.

Where: In Lahug district, Manggahan (30 Wilson St., Apas, map) serves all-time Cebuano favorites in an airy garden-style setting by day and a resto-bar environment by night.

Order: One plate of humba (Php 88) and some rice (Php 15 per cup), and get ready to swoon over the deeply braised, sweet, sour, and salty pork. The dish is called “Humba for Your Heart” on the menu here, ironically enough—the layers of fat are visible on the chunks of liempo, and everything is coated in the unmistakable sheen of rendered lard (but in a good way!). Try not to lick the plate clean, and leave room for crocodile sisig (“see-sig,” chopped meat on a sizzling hot plate) or fried bakasi (“bah-kah-see,” saltwater eels), if you’re up for something exotic. Don’t forget to order Manggahan Iced Tea, the restaurant’s refreshing secret concoction—our guess is it’s made of calamansi (a local citrus fruit), honey, and a small amount of black tea.

Good to know: Some prefer to eat humba with steamed Chinese buns called cua pao (“koo-wah-pow,” or mantou elsewhere), which are perfect for mopping up every last drop of sauce. Sometimes “cua pao” actually refers to steamed, humba-filled buns.