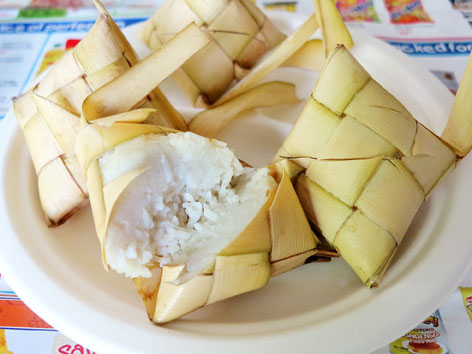 In the Philippines, puso (“poo-SO”) is rice wrapped and boiled in a triangular casing made of woven coconut leaves. It is also called hanging rice, as the packets are often picturesquely hung in bunches using the long ends of the leaves. Puso’s true origins seem lost in the annals of history, but variations of the same dish are familiar sights in other Southeast Asian countries, including Brunei, Malaysia, and Indonesia (where it’s called ketupat).

Regardless, it’s become an icon of Cebuano street food, for reasons both delicious and practical: The organic casing imparts a unique leafy flavor to the rice, which is compact and dense enough to be eaten straight out of the leaves, sans spoon and fork. Then there’s the cleanliness factor: Wrapped in the leaves, the rice is protected from flies and human hands in open-air eateries. Because it is portable and keeps for a day, it’s a regular item at picnics and on boat trips, where it is eaten alongside traditional Cebuano fare like grilled pork, chicken, or seafood.

Where: Ours is from a lechon stand just outside the checkout counters of Metro Ayala’s grocery (map).

Good to know: Although puso is typically a lunchtime thing, due to the popularity of call centers where shifts are around the clock, eateries near I.T. Park on Salinas Drive and Cybergate near Fuente Osmeña Circle (and Larsian, sinugba/barbecue central) will have some puso for sale at all hours.

Order: Puso, like the more common steamed rice, is generally the accompaniment to a savory dish (called sud-an or ulam)—it is rarely eaten on its own. Prices range between Php 3-Php 5; size will vary as well. Two or three puso are usually enough to accompany one or two types of sud-an for lunch or dinner.

Alternatively: Keep your eyes peeled for roadside stalls, eateries, and mobile food-cart vendors at events—chances are, they’ll have some puso hanging where you can see it. Or, if you find yourself in a mall like SM City (map) or Ayala Center (map), head for the food court, where the stalls selling Filipino food are likely to have puso as well.