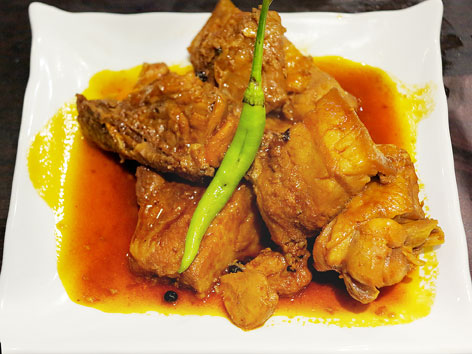 What: Adobo (“ah-doh-boh”) is the unofficial national dish of the Philippines, and an absolute Manila must. Hundreds of variations abound, but the basic idea remains constant: Pork and/or chicken is slowly stewed in vinegar and soy sauce, peppercorns, garlic, and laurel (a.k.a. bay) leaves. It is best eaten with lots (and lots) of plain rice. Adobo takes its name from the Spanish word adobado, which translates to “marinated,” but it appears that pre-Hispanic occupants of what later became the Philippines were making adobo before the Spanish came. The ancient version of this dish used vinegar (from coconuts, palm, sugarcane, or other local sources) and salt, as those were natural preservatives. (Unfortunately, its original name has been lost, but this type of adobo, favored by purists and now called adobong puti (“ah-do-bong poo-tee,” or white adobo), is still made today, usually at home.) When Chinese traders introduced soy sauce, adobo turned into the familiar dark-sauced dish that you’ll encounter around the country today. A good adobo reveals no tug-of-war between the vinegar and the soy sauce—the slow stewing process fuses the two together into one flavor that’s come to define what Filipino comfort food is all about.

Where: In Makati City, Mesa (632-728-0886; multiple locations including G/F P2 Greenbelt 5, Ayala Center, map) defines itself as “Filipino moderne.” Since it’s located in the center of the business district and in a mall complex peddling luxury brands, people here do dress up to chow down on adobo—even if they have to wait 10 to 15 minutes to be seated during the lunch and dinner rush.

Order: The chicken and pork adobo (Php 205) is a hearty serving to be shared between two eaters. The meat is at turns falling-off-the-bone tender (the chicken) and pleasantly fatty (the pork), with a lusciously savory flavor and added aroma from the laurel leaves, garlic, and peppercorns; the addition of annatto (locally known as achuete) gives it a reddish-yellow sheen. Traditionally this dish has no heat, but here it’s served with a green finger chile innocently placed on top, giving you the option of breaking it open for a hot and spicy adobo. We paired it with fluffy steamed rice, a green mangga (mango) salad with shallots and fish sauce, and tall glasses of sweet sago’t gulaman (see entry)—all three perfect accompaniments to the rich, saucy adobo. It’s hard to find a more satisfying Filipino meal.

Good to know: Filipinos often dine “family style,” for which dishes are served on platters meant to be passed around. Mesa follows this tradition, so it’s best to bring an army of friends if you want to try a nice range of dishes. Otherwise, expect to feel a little envy (and drool) as you check out other tables’ offerings.