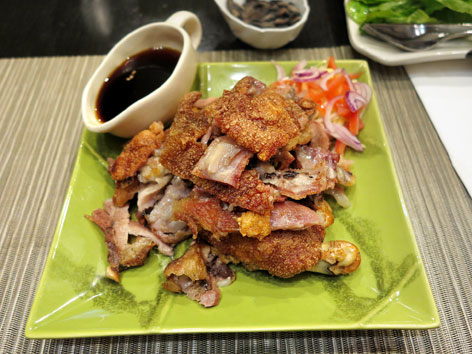 What: Crispy pata (“pah-tah,” Spanish for leg) is a pork-lover’s delight—crunchy pork skin enclosing savory tender meat. Crispy pata is usually defined as deep-fried pork trotters or knuckles, when it is, in fact, a cut from the hock to the foot. The simple-sounding name is misleading, as it isn’t simply deep-fried pork—cooking crispy pata is a two-part process. First, the meat is stewed until tender with bay leaves, peppercorns, garlic, onion, and salt; then it is drained and chilled before being deep-fried. This process ensures that the meat is cooked through and the skin becomes as crispy as possible. The meat is typically served on the leg bone, usually with atsara (pickled young papaya fruit) and a dipping sauce made of soy sauce and vinegar, with chile for some heat.

A restaurant in Manila called Barrio Fiesta says it invented crispy pata in the 1970s, and we haven’t yet found any disputes to the claim. What we do know for sure is that crispy pata has become a ubiquitous order in restaurants that serve Filipino food, and it’s often the main meat dish served for birthdays, reunions, and other special occasions, accompanied by a vegetable dish such as ensaladang talong (see entry). It’s no wonder, really—if you like pork, this indulgent dish is sure to please.

Order: One order of the boneless crispy trotter (Php 680) here is big enough to share between three or four people, especially since you’re generally expected to order and share other food items, Filipino style. Sentro presents its crispy pata already chopped up and off the bone, saving us the trouble of having to extract the tender, juicy meat. In sharp contrast, the skin was amazingly crisp and crackly, with only a thin layer of fat clinging to it. We’d heard that the best crispy pata uses younger piglets, and it seems that Sentro 1771 got that memo—what many misconstrue as fat in this cut of pork is actually protein-rich collagen in the connective tissue, which keeps the meat moist and flavorful. Our order arrived with slivered tomatoes and purple onions, as well as a mix of soy sauce and vinegar for dipping. We also tried this restaurant’s popular corned beef sinigang, which adds chunks of corned beef to Manila’s standard sour veggie soup instead of pork ribs, prawns, or fish. Yes, we went on a meat binge, and we loved it.