Tihlo (Tigrinya: ቲህሎ) is a dish from the historical Agame province in northern parts of Ethiopia that consists of barley dough balls covered with meat and berbere (berbere is made of chili after... Read more 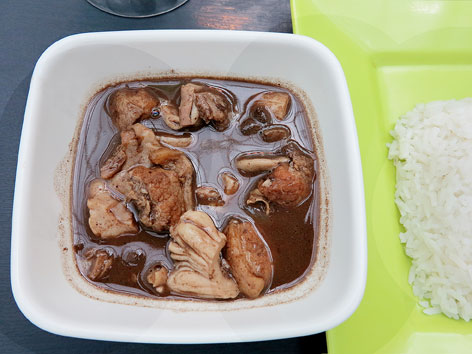 What: Try not to be too turned off by the name: Dinuguan (“dee-noo-goo-ahn”), which roughly translates as bloodied (dugo = blood), is what Filipinos call this rich, savory stew made with pig’s blood, pork meat and intestines, onions, vinegar, and long green chilies; typically it’s served with rice or plain, steamed rice cakes called puto (“pooh-toh”).  Its origins in the Philippines are a bit murky, as pigs are native to the Philippines and the dish could very well be pre-Hispanic—however, in former Spanish colonies like Mexico and Guam, there exists a type of stew that uses animal blood (pig or goat) in a similar manner. Wherever it was born, dinuguan surely came about due to lack of refrigeration in olden times, and the economic need to use every part of a butchered animal. Today, it’s a beloved festive food in the Philippines, popularly served at weddings and family parties and often spotted at fiesta buffets across the country.

As for the taste: Dinuguan is definitely porky and savory, not heavily salty, but usually with a sour note.Texture wise, this dish varies widely, from a fairly thin, light brown number to a thick, dark, grainy stew that Filipinos jokingly refer to as chocolate soup. All manner of dinuguan is popular in Manila, though, so there’s no way around it: Any student of Filipino cuisine here must try this dish. (If you are traveling elsewhere in the Philippine provinces, you might try another regional version—down south in Cebu, it’s called dugo-dugo (“doo-goh-doo-goh”), while up in Ilocos, it’s called dinardaraan, “dee-nar-dah-rah-an”).

Where: Eat Pinoy by Cabalen (632-553-2714; Food on Four Foodcourt, SM Aura Premier, Bonifacio Global City, Taguig, map) is the spawn of the Cabalen chain, which is actually from the province of Pampanga, but serves popular dishes from the general Tagalog region. Instead of the usual Cabalen buffet, Eat serves single servings of local favorites, including kare-kare and, you guessed it, dinuguan.

Order: The dinuguan (Php 150) here, served with a cup of rice, falls into the “thin brown soup” category.  It was slightly sour from the vinegar, which is said to stop the blood from coagulating and ensure that no unsavory smells remain in the cooked entrails. The latter were small, tender slices of pork intestines mixed in with small cubes of tasty pork meat. Overall the dish was surprisingly light on the palate and easy to scarf down with the rice—definitely something that we’d seek out again.

Alternatively: To taste the other end of the dinuguan spectrum—the darker, richer variety of the soup—head to Goldilocks (multiple locations including the food court of Robinson’s Galleria, Ortigas Ave. corner EDSA, Pasig City, map), a popular Manila chain of cake shops (of all things!) that also serves cooked and savory meals. Here was that denser stew-like dinuguan, served with puto, which were slightly sweet and very useful for mopping up the last of the tasty, thick brown sauce. So popular is this version of dinuguan that Goldilocks sells it packaged in heat-and-eat foil packs—so if you like it, you can bring this stew home with you.

Good to know: Squeamish about the intestines in your blood stew? Head over to Kanin Club (632-621-6109; at Ayala Triangle Gardens, Makati City, map) and seek out its crispy dinuguan. This version is intestine-free and uses tasty pork cubes fried to a crisp before being mixed into a super thick dinuguan sauce. Delicious!