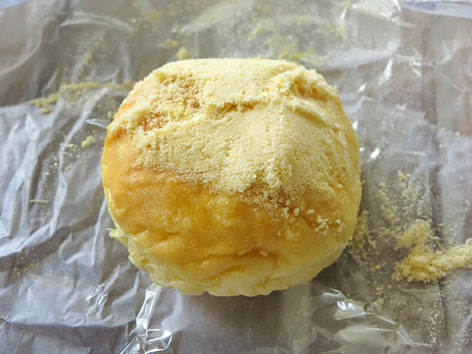 What: Ensaymada (“en-sye-mah-dah”) is a sweet ’n salty yeast-based bread often eaten as an afternoon snack—paired, perhaps, with a steaming cup of tsokolate eh (hot chocolate) or coffee. You’ll know it by its distinctly coiled shape, like a flat snail’s shell, which is topped with a heavy sprinkle of white sugar and/or grated cheese. The humble bakery version is about the size of the palm of one’s hand, while the super festive variety can be a nine-inch wide marvel meant to be sliced up like a birthday cake. Ensaymada is definitely a relic of the 300-year Spanish occupation of the Philippines, with its precursor, ensaïmada, still a popular bread item in Mallorca and (fellow former Spanish colony) Puerto Rico, where it’s called pan de Mallorca. Its name comes from saim, the Catalan word for pork lard, which is traditionally used in the Spanish version of this; in the Philippines, butter or margarine is a bit more common.

Where: On the recommendations of many, we got our ensaymada at Mary Grace Café (multiple locations including Steps Ballet School, Kalayaan Ave., Makati City, map). We were not disappointed.

Order: This ensaymada (Php 65) lacks the signature coil, but it hits the spot exactly the way you want it to. Topped with grated Edam cheese, known locally as queso de bola (as it is on Mexico’s Yucatan Peninsula)—which provides an enticing aroma even before you finish unwrapping the little goodie—it is a textural delight: dry grated, subtly salty cheese, crunchy sugar, airy buttered bread. Don’t let the diminutive fist-size portion fool you: It’s just the right amount for you to scarf down with coffee or hot chocolate, and it leaves you enough room to try other things. (That’s what we did, anyway, sampling the satisfying Molto Bene (meringue, custard cream, and mangoes) and Limone Santi (lemon curd with a graham-cracker crust), plus the Valencia hot chocolate (flavored with orange cream) and Mexican tsokolate (spiked with chili and cinnamon). Can you say “sweet tooth”?

Alternatively: Ensaymada can be found at nearly every café and panaderia (bakery), going for as little as five pesos for the corner-store variety to 90 pesos for a traditional, large homemade one, such as those made by grand old dame Pasteleria Mallorca (632-373-2789; 18 Scout Fuentebella, at Scout Santiago, Quezon City, map). Standard mall varieties such as those by Red Ribbon, Goldilocks, and Muhlach’s are sold in individually wrapped one-dozen packs to take home as pasalubong (“pah-sah-loo-bong”), gifts to hand out from a trip.

Good to know: There are hardcore Mallorca-style ensaymada and there are commercial, mass-produced versions. You can find them sweet, buttery, cheesy, and even topped or filled with ube (“ooh-be”), a purple yam that’s popularly cooked like a sweet jam. Our advice? Try them all!