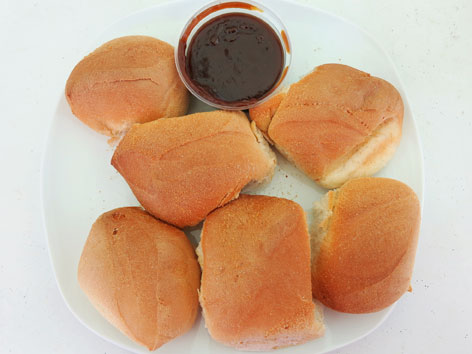 What: Pandesal, also spelled pan de sal (“pan-de-sahl”), translates as it does in Spanish: bread with salt, a humble breakfast staple that can be eaten on its own, dunked into coffee or hot chocolate, or filled with things like butter, kesong puti (a soft cheese from carabao/ water buffalo milk), peanut butter, liver spread, coco (coconut) jam, corned beef, even scrambled eggs. Best served piping hot, these fist-size, yeast-raised bread rolls are slightly crunchy on the outside, with a fine coating of crumbs, and dense and chewy inside, with a taste more subtly sweet than salty (more on that later).

Pandesal traces its history to the arrival of the Spanish colonists, who brought wheat flour to the islands and baked bread in wood-fired pugon ovens (from fogon, a now archaic Spanish term for a clay stove), which gave this bread and its cousins distinct flavors and textures. Traditionally, pandesal were sold by vendors on foot, or in panaderias (bakeries) that produced a sweet, warming smell that can be sniffed down the block. Pandesal rose in popularity in the Manila region during World War II, when rice shortages due to embargos and typhoons meant people had to seek out other inexpensive foods for basic sustenance.

Where: With many branches, Pan de Manila (multiple locations including the ground floor of McKinley Park Residences, 31st St., Fort Bonifacio Global City, Taguig, map) is a modern take on the pugon-style bakeries of yore. It prides itself on its wood-fired-brick-oven-baked pandesal (see Good to know, below) and offers a nice selection of things to pair or fill them with—butter, cream cheese, cheese spreads, peanut butter, even tins of sardines, as well as sachets of instant drinks such as chocolate con leche (Manila-style hot chocolate with milk) and café con leche, coffee with milk. Just like the old bakeries, there’s no real place to sit down in the shop, so be prepared to take your goodies to go.

Good to know: Independent pugon-style bakeries making pandesal have been disappearing over the last 30 years, and the bakery-chain stainless-steel ovens that have replaced them produce a pandesal of different flavor and texture—they tend to be pillow-soft and overly sweet. Pan de Manila showed up about 15 years ago and positioned itself as a pugon-style bakery, albeit a chain as well. Its accessible locations, 24-hour branches, and thousands of pandesal baked fresh daily help keep the memory of pugon-style neighborhood panaderias alive, if in modern incarnation.

Order: One regular (small) pandesal costs Php 3.25 each—we bought six pieces to share between two people for breakfast—and is a pretty decent representation of old-time pandesal. To go really local, we paired ours with a small tub of coco jam (Php 35), a reduction of coconut milk and sugar that spreads like smooth peanut butter. The pandesal’s crust easily gave in to its dense, chewy innards, with a taste that’s not salty in any pronounced way (confirming our suspicion that present-day pandesal tends to be sweeter, or at least less salty, than they were 30 or so years ago, when panaderias abounded). But we weren’t complaining: Before we knew it, we were down to one pandesal left apiece, and, dusting off the fine crumbs from our fingers, reached for the coco jam. The combination was richly delicious, with the bread absorbing some of the sweet, fragrant, almost caramel-like jam. Bonus: leftover coco jam to take home with you.

Alternatively: Should you find yourself in Bel-Air, in Makati, swing by Pan De Amerikana (multiple locations including Constellation St., Bel-Air, Makati, map). It claims to produce the traditional, 1950s-style pandesal that many Manileños crave: pugon-baked, slightly salty, without preservatives or improvers. Otherwise, try your local bakery—they usually have a glass case up front, so if you see pandesal, give it a whirl—and let us know what you think!