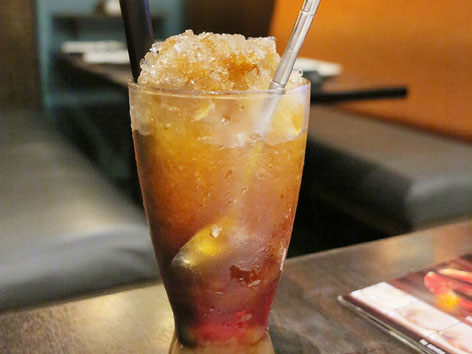 What: When tropical heat and humidity join forces, you need a reliable drink with which to beat it back. Enter sago’t gulaman (“sah-go’t goo-lah-man”), the ever-present Filipino cooler made with a special sugar syrup, sago balls, and cubes of gulaman (more on these ingredients below). Its origins seem to be lost to history, but nowadays you are bound to encounter it everywhere in Manila, from roadside stalls to five-star hotels, on beverage lists and dessert menus alike. It’s a curiously sweet, chewy drink that you’ll find yourself craving after a few days here.

Good to know: Sago were traditionally sourced from the sago palm, but since it takes seven years for the plant to be viable for harvesting, the common substitute is actually tapioca balls, which comes from a hardy, fast-growing root crop. Gulaman is the cousin of gelatin, but while the latter is derived from animals, gulaman is made from a type of seaweed that thrives in the Philippines. Gulaman also retains its solid, jelly-like state whether it’s left at room temperature or swimming in gallons of cold water and arnibal (“ar-nee-bahl”)—the sweet stuff that gives this drink its character. Generically described as a caramelized sugar syrup, arnibal is actually more genteel than simply sugar boiled in water. The brown sugar used for arnibal is less refined than white or castor sugar, and tends to have random bits (usually sugarcane) that require filtering through cheesecloth. Arnibal is also traditionally flavored with pandan leaves or banana essence, giving the drink its peculiar but pleasant aroma. In general, if you find your sago’t gulaman too sweet, you can ask for more ice cubes or shaved ice to water it down.

Where: In Makati City, Mesa (632-728-0886; multiple locations including G/F P2 Greenbelt 5, Ayala Center, map) is an excellent place to taste typical Manila fare. Its sago’t gulaman is one of the best you’ll find in the metro area.

Order: We ordered our sago’t gulaman (Php 75) to pair with adobo—an excellent idea, as it provided the perfect flavor contrast to the ultra-savory, meaty adobo. Our glasses came tall and proud, brimming with finely crushed ice, which we gleefully smashed down to mix with the arnibal, sago balls, and cubed gulaman. The level of sweetness was just right, with a subtle, fragrant aroma that we guess came from the pandan leaves. The chewy textures of the sago and gulaman reminded us why this drink is often listed in the desserts section of restaurant menus—had we not filled up on adobo, rice, and mango salad, we might have ordered another round of this delicious cooler.

Alternatively: We’re not kidding when we say sago’t gulaman is everywhere—you will not have trouble tracking it down. Look for it on the street, where it is usually kept in tall plastic jars and called samalamig (“sah-mah-lah-mig,” loosely translating to “something cold”); at times the icy liquid is milky pink, but usually it’s brown. If you doubt the water source of the street stuff, go to an established restaurant chain instead, like Max’s, Goldilocks, or Conti’s, all of which serve sago’t gulaman.