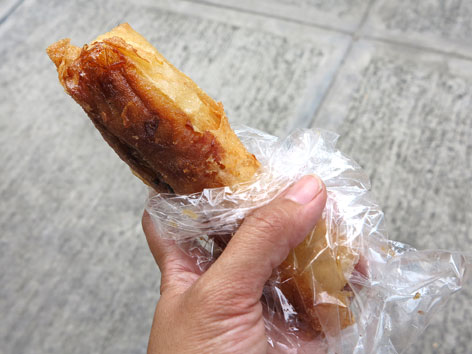 What: Turon (“too-ron”) are saba bananas (cooking bananas, similar to plantains) that are wrapped in rice paper, deep-fried, and glazed with brown sugar. If you’re lucky, there will be a piece of ripe jackfruit tucked inside, which lends a fruity aroma to the mildly flavored bananas. Both crunchy and chewy, turon is a sweet snack commonly eaten during afternoon merienda (“mer-yen-dah,” snack time), or as a dessert item. Sometimes they are misidentified as banana fritters, which they are not—banana fritters are coated in flour, while turon are wrapped in the same stuff used for spring rolls. We can only guess how turon came to be, as the wrapping style appears to be of Chinese heritage while the name sounds distinctly Spanish. (However, it bears zero resemblance to Spanish turrón, a nougat-like almond candy.) Whatever its exact origins, we know for sure that turon has evolved into a Manila snack staple that is definitely worth a taste.

When: Abdiel’s is open during MC Home Depot’s business hours (daily, 9am-8pm), but 3pm-4pm is a good time to visit, as snack items will be piping-hot and fresh.

Order: One order of turon (Php 15) looks like a six- to eight-inch fried spring roll—quite hefty considering it’s filled with very dense saba banana. Freshly made and still slightly warm, this had some nice textures going on, a light crunch from the sugar-glazed spring roll wrapper and a sweet, starchy chewiness from the ripe saba. It made a perfect afternoon pick-me-up, heavy enough to keep hunger pangs away till dinner while still satisfying the sweet tooth.

Other items on offer here are two classic “skewer” snacks traditionally sold by vendors alongside turon—kamote cue (“kah-mo-teh,” sweet potato) and banana cue (with saba bananas). As with the turon, the cues are deep-fried, but without the rice-paper wrapping. Brown sugar is added into the boiling oil during the last minutes of cooking; this melts the sugar into a caramel-like goo, which sticks to the items being fried. When removed from the wok, the sugar recrystallizes into irregular chunks—the prized feature of turon, kamote cue, and banana cue. They are then skewered on bamboo barbecue sticks and laid on wilted banana leaves, awaiting hungry snackers.

Alternatively: Some Manila restaurants like Mesa (632-728-0886; multiple locations including G/F P2 Greenbelt 5, Ayala Center, map) present turon with a contemporary twist by making them bite- or finger-size; drizzling them with caramel, chocolate sauce, or liquefied latik; sprinkling on some toasted sesame seeds; and topping them with a scoop of ice cream. Absolutely delicious! Kanin Club (632-621-6109; at Ayala Triangle Gardens, Makati City, map) makes turon in limited quantities per day, and while we didn’t get to try this dish there, it is said to contain not just saba bananas, but other ingredients found in halu-halo. Our advice, if you head there: Order your dessert at the same time as your mains, and ask them to serve dessert later! Failing any restaurant attempts, try your luck outside schools and even on random street corners between 3pm and 4pm, when turon and its sugary friends are most likely to make their daily appearance.