<< back to foods in Vancouver 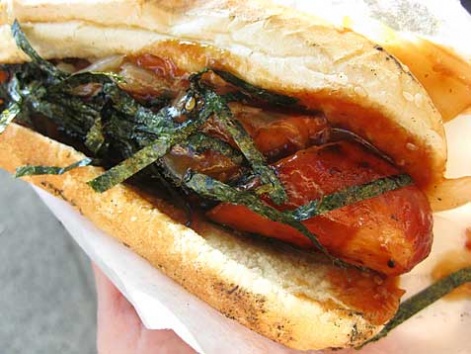 What: Hot dogs (beef, pork, turkey, veggie) with such unexpectedly delightful toppings as teriyaki sauce, bonito flakes, scallions, nori, and wasabi mayo, served on the street. Asian-style dawgs are becoming something of a trend in other North American cities, but we saw it in Vancouver first.

Where: Since 2005, Japadog (multiple locations downtown including the original at Burrard St. at Smithe St.) has peddled its popular hot dogs out of various street carts in Vancouver.

When: Mon-Thurs, noon-8pm; Fri & Sat, noon-9pm; Sun, noon-8pm. Check the website for additional closings due to holidays or weather. The line-averse might want to avoid the lunch and post-work crowds.

Order: The menu varies at each location, but at the Burrard/Smithe cart, we liked the bratwurst terimayo (CAD$5.25; pictured), topped with teriyaki sauce, fried onions, nori, and wasabi mayo; the Okonomi ($6.25), an all-natural kurobuta pork dog topped with mayo, fried cabbage, and bonito flakes; and the Oroshi ($4.75), bratwurst topped with grated daikon (radish), scallions, and soy sauce.

Good to know: Japadog opened a storefront at 530 Robson St. (map) in 2010, with new menu items (including dessert dogs!), and recently expanded to the U.S.: An outlet opened in New York City in January 2012.