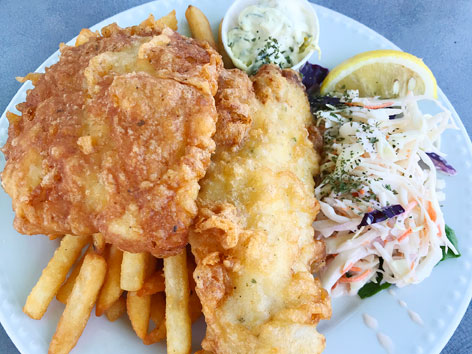 What: Nova Scotia, being a Maritime Province in a Commonwealth nation, is prime fish-and-chips territory. People love this dish here: Particularly on the South Shore but well beyond as well, countless restaurants, fish shacks, and food trucks tout their fish and chips. It’s usually haddock; if you’re lucky, the fry will be perfectly crisp and the chips thick and hand-cut. Plan on eating it at least once in this area!

Where: Shaw’s Landing (6958 Peggy’s Cove Rd./Prospect Rd., map) in West Dover, just a few minutes east of iconic Peggy’s Cove (and her lesser-known, possibly more stunning sister, Polly’s Cove), is celebrated for its lobster but has great homemade food across the spectrum, including fish and chips. Essentially, it also has a beautiful outdoor deck overlooking some tranquil water, a good local beer list, and a great slogan: “Beer + Lobster. Enough Said.”

When: Seasonally open, May through Oct.

Order: The fish and chips ($13) is fresh haddock here, soft and mild and encased in a crunchy fry that’s downright delicious eating. The fries are equally delicious; heck, even the homemade tartar sauce and coleslaw are top-notch. Vinegar and ketchup are available too. While you’re here, you’d best be getting a steamed lobster as well.

Alternatively: This ain’t hard to find. Fear not. Along the South Shore, you might try the inviting little fish shack called Maya’s Favorite (4 French Village Station Rd, Upper Tantallon, map) at the top of St. Margaret’s Bay, or in Halifax, grab a counter seat at the iconic (and award-winning) John’s Lunch (352 Pleasant St., map), near the wharf in Dartmouth.