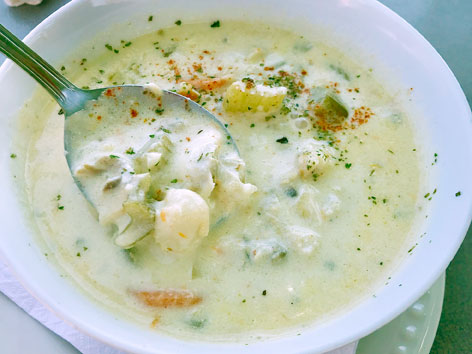 What: Much like steamed lobster and fish-and-chips, seafood or fish chowder is a standard menu item in Nova Scotia, particularly on the South Shore. It’s just another popular use of the area’s seafood bounty. It might be lobster and corn or haddock and smoked bacon, but chances are the soup on offer will be a cream-based chowder of some sort, and it’s generally a very good bet when dining out in Nova Scotia.

Where: This chowder is from Shaw’s Landing (6958 Peggy’s Cove Rd./Prospect Rd., map) in West Dover, a few minutes east of iconic Peggy’s Cove (and gorgeous Polly’s Cove), one of many South Shore restaurants offering it. It has a beautiful outdoor deck overlooking some tranquil water, a good local beer list, and a great slogan: “Beer + Lobster. Enough Said.”

Order: Shaw’s offers both homemade lobster chowder (in a tomato base) and seafood chowder, pictured ($11.95/$14.95 for small or large), which is cream-based and chock-full of haddock, clams, scallops, crab, shrimp, and lobster. It is absolutely delicious, like New England-style clam chowder to the nth degree. This is definitely a great place to try the sweet local lobster too.

Alternatively: Try the seafood chowder at pretty Rhubarb (8650 Peggy's Cove Rd., Indian Harbour, map), or any other chowder that strikes your fancy. It’s not hard to find!