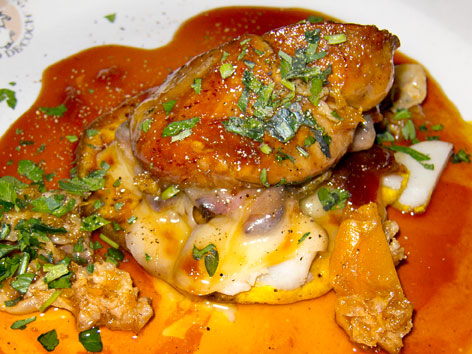 What: It’s long been around in Montréal, thanks to the city’s historic French influence, but recent years have seen a pronounced elevation of foie gras (fatty goose or duck liver) here. One might say that Montréal is crazy for the stuff, that it’s hard to find a French or Québécois menu here that doesn’t do something with the rich, creamy delicacy. Some restaurants in particular are so-called temples to foie gras, making them good spots to indulge—if you choose to indulge.

Note: It’s hard to discuss foie gras without paying heed to the unending animal-rights controversy that will always surround its production—namely, that part about force-feeding geese and ducks to fatten up the livers before they’re slaughtered. The practice is illegal in several countries (plus California) nowadays, but in Québec the industry thrives. We respect the individual’s right to choose what he or she wants to order in a restaurant, but may we suggest consuming in moderation?

Where: One of Montréal’s most celebrated Québécois restaurants, the boisterous, decadent Au Pied de Cochon (536, ave. Duluth Est, map) is a veritable shrine to the pig (“cochon”), but also to fatty duck liver—in fact, there are whole sections of the menu dedicated to each. Chef Martin Picard made his name when he famously put foie gras poutine on the menu back in 2001 (thus single-handedly reigniting poutine love across the province), but the down-home liver love hardly stops there. You don’t come here if you’re watching your cholesterol—or if you’re a vegetarian, for that matter.

Order: Pictured is the Plogue à Champlain ($31), a super rich dish of sliced potato, poached egg, cheddar cheese, and thick-cut bacon atop a buckwheat pancake, capped with seared foie gras and maple syrup, which comes from APDC’s own sugar shack outside the city. It’s a creamy, meaty, salty, sweet, very bold explosion of flavors, best shared by a group (or you won’t have much room for more food).

This signature APDC dish is not always on the menu. If it's not, don't worry: Foie gras dishes abound here. Your other choices may include a cured foie gras burger, tart (with boudin sausage or not), terrine, and poutine, as well as the famed “duck in a can,” for which balsamic-glazed duck breast, foie gras, and braised vegetables are dumped unceremoniously out of a can, and the pièce de résistance: the PDC farci au foie gras, or pied de cochon (pig’s foot) stuffed with foie gras. Off the starter menu, we also enjoyed the comparatively understated foie gras cromesquis, crispy little deep-fried, breaded croquettes filled with molten liver.

Good to know: Chef Picard, who practices a seasonal, local, nose-to-tail cooking philosophy, has said he’s visited the foie gras farm he sources from on several occasions and believes the animals are treated well there.